Op-ed:
Scandals abound but let's NOT forget about the nightmare that is ObamaCare
By: Diane Sori

As Howard Dean rants on national television that the GOP needs to get out of America...after all everything to him and his ilk is the Republicans fault...the ObamaCare 'supposed' glitches continue on as Nevada follows Oregon (who had NOT one person sign-up though the exchanges), Massachusetts, and Maryland, to become the fourth state to admit its private enrollment system done though the ObamaCare exchanges just cannot be fixed. Now leaving its state exchange behind, Nevada will join federal HealthCare.gov...for at least one year anyway...even though Republican Governor Brian Sandoval opposes ObamaCare.
Governor Sandoval, who rightly thought it important for Nevada to run its own exchange, was overruled by the state's exchange board that obviously thought otherwise, and decided to ditch the exchange as in their opinion it could NOT be repaired in time for the 2015 enrollment period that is scheduled to begin this November.

So as Nevada joins the ranks of the disenfranchised, here's a bit more happiness folks...a recent Kaiser Health Tracking Poll has shown that for every person ObamaCare has helped, at least two have been hurt by it...translating into a mere 18% benefiting from ObamaCare, while 30+% say they have been "negatively affected" by ObamaCare (and those numbers do NOT include those who have been cancelled under Obama's LIE, "if you like your health care plan you can keep your health care plan." And among those who have been negatively affected by Obamacare, 54% said their health care costs increased, 9% said it decreased their options and/or choices, and 8% said they opposed the entirety of the individual mandate itself. 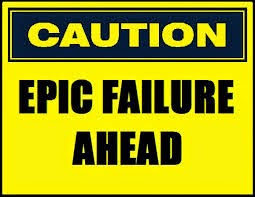 NOT good at all for Obama's signature health care law...his 'supposed' legacy...is a failure NO matter what he and his minions say with even liberal media polls conducted by the likes of MSNBC, The Washington Post, and USA Today all have found that more Americans say ObamaCare has had a negative impact on their lives...on their pocketbooks...than say it has had a positive impact.

In other words ObamaCare still stinks.

And now it's been announced that ObamaCare deductibles maxed out at a whopping $6,350 per person this year, will next year go even higher to cap out at $6,600 per person per year...NOT per family but per person. And for a family of four that translates into an unbelievable $26,400 per year...an amount forced on them by a law that they NEVER wanted for coverage they NEVER needed and CANNOT afford. 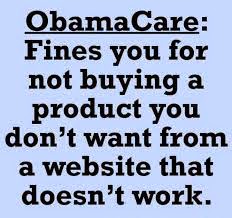 And businesses will be hit as well as ObamaCare's soon to be enforced employer penalties will rise from $3,000 per subsidized full-time employee to $3,120 per employee. And the fines and penalties that were put on hold for this year, continue to grow so that in 2015, employers with at least 100 full-time-workers will owe $2,080 for each of those workers after an exemption for the first 30.

Talk about a job killer...and it gets even worse for the fact is that by 2016 the ObamaCare employer mandate will apply to firms with only 50 full-time-workers, with the fines going even higher.

And it gets worse. While there are ongoing serious issues currently under investigation concerning the VA and the long waits our veterans face when they need to see a doctor or get treatment, ObamaCare itself throws another wrench into the mix by increasing 'fragmentation' of care among vets who now rely solely on the VA for treatment. This means that those vets who use both VA and non-VA sources for treatment are more likely to be re-hospitalized and die within a year compared with VA-only users...and this comes from Dr. Kenneth Kizer, a former under secretary of Health for the Department of Veterans Affairs.

Fact...ObamaCare also affects pre-911 disabled vets that require 24/7 care who are NOT eligible for Medicaid. Their family caregivers are NOT covered under the Caregiver Act of 2010 as only post 911 caregivers are covered, so the cost of these caregivers health care will now have to come out of their own pockets or the caregiver will be fined or will have to sign a waiver and NOT be covered.

And if a veteran is only eligible for care at military hospitals and clinics and is NOT covered under certain 'TRICARE' plans this means they do NOT have minimum essential coverage as mandated under the rules of ObamaCare, and they too will be fined or required to get additional coverage. And this involves those getting care for 'line of duty only' related conditions and those vets or the family members insured under the 'TRICARE for Young Adults' plan who may now need their coverage altered to be in line with ObamaCare required coverage, especially in the area of mental health care.

And our vets under 'TRICARE' will get hit like the rest of us in their pocketbooks with 'TRICARE Prime' retirees who are under age 65 seeing an increase in the enrollment fee that they pay yearly that will be based on the amount they receive in their retirement pay from the military. And 'TRICARE for Life', the program for retirees over 65 would see increases in enrollment fees as well as changes to the catastrophic cap...the maximum out-of-pocket amount beneficiaries will pay each fiscal year.

So our veterans get the shaft by this administration yet again. 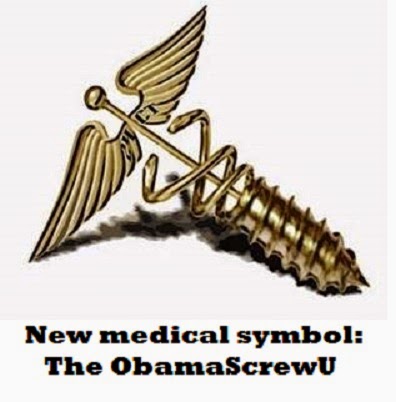 And so to date ObamaCare continues to trudge along screwing 'We the People'...screwing our veterans and their families...in the process. All our fears about this most grievous of laws have come to pass...death panels, rationed medicine, NOT being able to keep the coverage or doctors one likes or can afford, coverage mandated for things one does NOT want or need...the list is endless making ObamaCare a fraud plain and simple...a fraud because simply allowing people to purchase insurance across state lines...thus broadened the base...would have allowed premium rates to drop without doing anything else to the insurance set-ups.

So when we retake the Senate in November (like my positive thinking) repealing ObamaCare must become a number one priority for there was NOTHING wrong with America's top-notch health care system to begin with. This most miserable of presidents turned health care into a political issue for NO other reason than to win (steal) an election, assure a new generation of Democratic voters, and to increase the existing Democratic base of those tied to the government teat for their mere existence.

And so ObamaCare continues to be the stuff of nightmares that we still seem unable to wake-up from...sad isn't it.
Posted by Diane Sori at 12:00 AM