Op-ed:
By the Thousands They Flee
By: Diane Sori 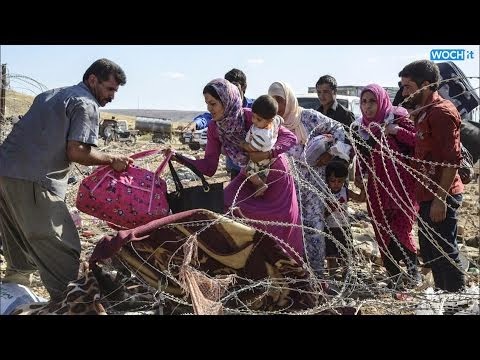 "I'm glad to get rid of these five people."
Harry Reid's response to the release of the GITMO 5 for one Bowe Bergdahl

Sadly and against intelligence orders, back in 2009, ISIS leader Abu Bakr al-Baghdadi was released by Obama from Camp Bucca in Iraq. And now reported to be in Iraq is Mullah Mohammed Fazi...one of the GITMO 5 Obama 'exchanged' for the American traitor Bowe Bergdahl...and done so without Congressional approval I might add...and it's rumored the two are now working together to establish the islamic caliphate and to kill all who get in their way.

And so it becomes even more obvious that Barack HUSSEIN Obama's true motives in having these most dangerous of men released has assuredly crossed the line into knowingly and willingly 'aiding and abetting' the enemy...in other words TREASON...for he knew this would be the outcome when he released those that he did...released them to lead and serve ISIS...the very group he was briefed about well over a year ago that he deliberately chose to ignore.

And what of ISIS itself and its goal of establishing an islamic caliphate...expanding it westward and eastward from the areas it already controls in both Syria and Iraq...for the fact is that ISIS does indeed represent a direct threat NOT only to U.S. allies in the region, but given the number of foreign fighters within its ranks... unfortunately including Americans...ISIS now poses a threat to Europe and America as well for as those fighters return home they do so to join sleeper cells waiting for their call to jihad. And let's NOT forget the ISIS videos where they have promised to divide America in two...where they have threatened car bombs and explosives in our cities...and where they brag about a future where the flag of allah will be raised over the White House...to which I add maybe with Obama's help.

And so ISIS continues on its forward march as they overrun Syria's north, forcing some 66,000 Syrian Kurdish refugees to flee into Turkey within the past 24 hours alone, making it upwards of 100,000 people who have crossed into Turkey in just the last few days, according to the U.N. High Commissioner for Refugees in Turkey. And with the number of Syrian refugees now in Turkey nearing 1.6 million and growing...that 1.6 million now becomes part of the 3 million registered Syrian refugees the U.N. has counted since Syria's three-year civil war began.

So many people fleeing their homeland as it becomes obvious that while Bashir al-Assad might NOT be the Syrian people's best friend per se, ISIS and the 'supposed' rebels are indeed their worst nightmare. Remember, the rebel fighters are often religious and see NO problem at all with building up alliances with the jihadists against a common enemy...that being Bashir al-Assad. And with ISIS, the Free Syrian Army, and the other rebel groups all trying to oust al-Assad...the once mostly secular Syria could very well become part of the ISIS wanted islamic caliphate complete with the abomination known as sharia law.

And the Syrian people know this, as well they know what our clueless Congress has chosen to ignore...that these rebel groups...that the Free Syrian Army...are actually ISIS and al-Qaeda in disguise. And when you add in what Obama has knowingly done by releasing the worst of the worst it's NO wonder that the Syrian people are running for their lives.

So while these desperate people seek refuge in Turkey, and as our government gets ready to fund those who are actually the enemy, Kurdish fighters from Turkey are joining the Kurdish militia...known as the People's Protection Unit...in fighting to hold off advancing ISIS forces in Syria's northern region, according to the Syrian Observatory for Human Rights. And basically these fighters are being forced to go it alone without America's help thanks to Barack HUSSEIN Obama and this most shameful American Congress who want to arm the very ones that are forcing the people to flee.

And as village after village fall in Syria, Iraq, and Kurdistan to these ISIS barbarians...with 39 villages falling in Kurdistan just this past Friday alone in what amounts to ethnic cleansing...Kurdish fighters were forced to withdraw from their positions. And what does Obama do to help aid those who are our allies...he smugly continues on with his 'limited airstrikes'...maybe six to nine per day...just to show the world he's doing something while his something amounts to what is actually NOTHING at all.

And this is all so sad for the Kurdish Syrian fighters had been able to fight and hold off ISIS for the past two years, and even were able to secure some roads as a safe passage for the thousands of Yazidi fleeing for their lives. But now thanks to ISIS in possession of American made weapons and arms...weapons they took from Iraqi soldiers who high-tailed it and ran when the going got tough...ISIS is now advancing across northern Syria killing Iraqi's, Kurds, and Syrians with those very U.S. made weapons and arms.

And Obama and Congress...through the Free Syrian Army...want to supply them with even more.

But amidst all this bad news there is a bit of good news. First, the Kurdish peshmerga forces in northern Iraq have recaptured several Christian villages under ISIS control even killing a senior ISIS commander in the process. Second, the Kurdish peshmerga are more than willing to fight ISIS, they just need to get the training and the heavy weapons they need to do so.

But even that bit of good news is tempered with bad news as who will the peshmerga get those heavy weapons from as Obama and now Congress are arming their enemies instead of arming them. And while there are Shia militias also fighting against ISIS those militias are backed by Iran...trained by Iranians and/or Lebanese fighters from Hezbollah...a double-edged sword if ever there was one for how can Iran side with the 'good guys' when Iran itself is one of the 'bad guys'...probably the baddest guy of all.

So as ISIS...now more of a quasi-state than just a mere terrorist group...continues on its quest of establishing an islamic caliphate...it has plenty of weapons and arms and more than enough financial resources to do so. And Barack HUSSEIN Obama and now Congress are aiding them in that quest...aiding them by their own acts of treason...and it seems that sadly, right now, there is NOTHING or NO one that can stop them...and that is the saddest thing of all.
Posted by Diane Sori at 12:00 AM