Op-ed:
Peaceful with Dignity...the Antithesis of Islam
By: Diane Sori

“The real face of Islam is a peaceful religion based on the dignity of all human beings.”

So said Secretary of State John 'Swiftboat' Kerry when he spoke at the State Department earlier this week. Meeting to officially introduce Shaarik Zafar, the State Department's new “special representative for muslim communities,” Kerry simply does NOT get the fact that first, 'We the People' do NOT need or want a special representative to anything muslim, and second, the words dignity and islam are polar opposites in meaning and should NEVER appear or be said in the same sentence together.

To have, show, or bestow dignity is to live with the moral and ethical concept that conveys that a person has an innate right to be valued and receive ethical treatment...and in NO way does islam...NOT today or throughout its violent history...afford dignity to anyone within its fold let alone to any of those who are NOT muslim. 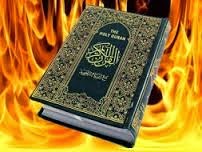 And this point cannot be made any clearer than in how islamic jihadists...like ISIS...use taqiyya even on themselves...killing each other as well as killing we infidels...which goes against the words of their very own qur'an. “Muhammad is the apostle of Allah. Those who follow him are merciful to one another, but harsh to the unbelievers” qur'an (48:29). These words themselves give credence...give proof...to the fact that we who live in the 'civilized world' are fighting against 'savages' who are anything but civilized...savages out to kill us all. And know that in this battle the enemy is indeed islam yet the fight itself is NOT really about islam per se but is about control...total and complete control coupled with outright conquest and ensuing subjugation...barbarism personified and everyone everywhere is dead center of islam's target.

And this makes Kerry's statement delivered even after it became known that two American journalists were beheaded shows blatant insensitivity to the families of James Foley and Steven Sotloff, but what do you expect from a member of an administration that cares more about the enemy than our brave troops who fight them. And this becomes obvious in the Obama policy for war...a policy that ties the hands of our troops so as to win the hearts and minds of the enemy alone...a policy that does NOT allow our troops to win the war if winning the war means the death of too many of his brethren. 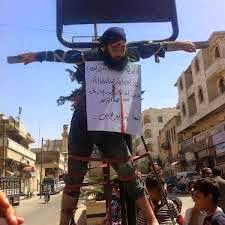 The enemy...but even before Kerry spewed his recent words Barack HUSSEIN Obama said this past July that 'the enemy' shares our “values of peace." But what does this man know of peace for after George W. Bush had won the Iraq war he and he alone allowed the peace to be lost...and losing the peace allowed ISIS to be born...to fester and grow strong...to kill any and all who opposed them. And Obama's response to ISIS...initiate 'limited bombings'...bombings which might slow them down for a bit but will NOT be enough to stop them for the only way to stop a well organized killing machine like ISIS...a machine NOT unlike a shark on a feeding frenzy...a machine running solely but steadily on blood lust...is to literally blow them back to the 7th century from whence they came...and 'collateral damage' be damned.

And even though some in our country still refuse to see it...and even though some still refuse to accept it as fact...this is a battle of 'them' vs. 'us'...and in order for our children and grandchildren to have a future the victor damn well better be 'us.' But Obama's pussy-footing around with his weak policies of war that in reality protect and aid the enemy...as in treason...we all know or should know by now that having 'us' the victors is NOT something on the Obama agenda.

Remember again that while Obama spews that islam shares “the values of peace” with other religions and cultures, he knows full-well that NOTHING could be further from the truth for islam is NOT and will NEVER be about peace as its actions prove what words might NOT. Case in point...almost all acts of terrorism since 9/11 have been committed by followers of islam...the cult of death...committed with the words "alahu akbar" spewing from the 'savages' lips as they commit one atrocity after another...atrocities always committed in the name of allah...always committed in the name of islam.

And to add to the absurdity and calculated deception of it all, please note that Obama recently said that "The Islamic State has already failed.” Failed...I don't think so as heads continue to roll as ISIS moves NOT only east but west into Jordan as well. Failed...I don't think so for how can they be failures when the President of the United States bows to their cause when at times he calls them 'The Islamic State' while at other times he calls them ISIL. Always refusing to call them ISIS for to do so would show the world...would show his brethren...that he recognizes Israel's right to exist. And that we know is one thing his brethren will NEVER allow nor will they ever accept, especially coming from the mouth of the man who is one of 'them'...from the man most assuredly NOT one of 'us'.

So as ISIS continues to conquer whole swaths of the Middle East, they throw in our faces that they are doing so with both seized and stolen American military equipment and weapons...doing so with more monies and more arms than even al-Qaeda has...doing so with the fact that as of today ISIS quite possibly has enough uranium to build a small but powerful radioactive dirty bomb. And as they now march east into Pakistan they will most assuredly soon have control over Pakistan's nuclear arms...and if that's NOT enough to force Obama's hand...to force his hand to take action that might actually help stop them dead in their tracks...than I don't know what will.

So by his lack of true definitive actions regarding ISIS the Obama agenda of fundamentally changing America has indeed been put in motion...fast forwarded if you will...and we better "hope" that the "change" he is striving for can be stopped in time or his words said back in July will become the mantra that we all will be forced to repeat over and over again whether we like it or NOT...be forced to repeat if we want to keep our heads that is.
Posted by Diane Sori at 12:00 AM