US Census Data: Uninsured Rate…Increased in 2014?

Wait, what? We've expressed a healthy skepticism of the administration's "official" enrollment numbers, and for good reason -- but even I must admit to being a bit flummoxed by the United States Census Bureau's new findings that America's uninsured population increased in 2014 over 2013.  That data, via Phil Kerpen: 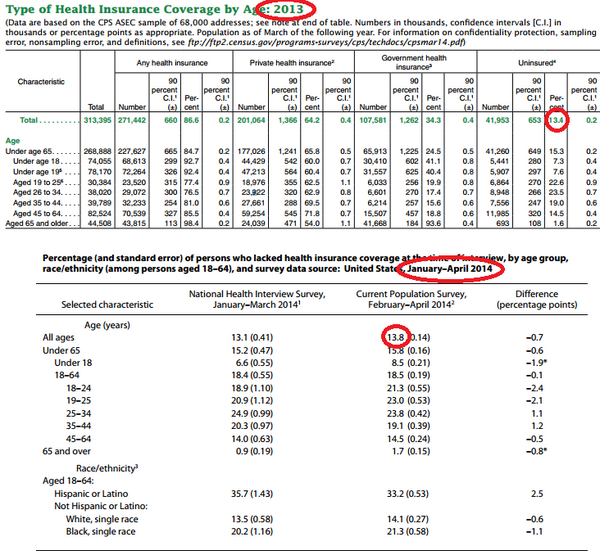 A separate government metric indicated that the uninsured population has decreased by 3.8 million overall, which falls far short of the administration's alleged numbers, but is at least an uptick.  Writing at Forbes, policy analyst Joseph Antos delves into the numbers:


This week’s double-barreled release of government statistics on health insurance coverage leaves us with only one question: How many Americans are insured because of Obamacare? Remarkably, the two highly regarded government surveys released this week do not even agree whether the number of uninsured increased or decreased. The survey that received a great deal of attention said there were 3.8 million fewer uninsured. The other, which was hardly noticed, found that there were 1.3 million more uninsured…The Centers for Disease Control (CDC) reported preliminary results on the expansion of health insurance coverage. Its National Health Interview Survey (NHIS) interviewed 27,000 people in the first three months of this year. The survey estimates that the number of uninsured dropped by 3.8 million since 2013. That represents a 1.3 percentage point decline in the uninsured rate, from 14.4 percent last year to 13.1 percent early this year. Estimates from an even larger survey of the uninsured from the nation’s premier statistical agency, the Census Bureau, were released a few hours later. The Census Bureau has been collecting information on health insurance for decades based on the Current Population Survey (CPS).

Data were collected from a sample of 68,000 households in February, March, and April of 2014. That survey found that 42 million—13.4 percent of the population—were uninsured in 2013. Interesting, but last year’s uninsured rate tells us nothing about how much the Affordable Care Act (ACA) expanded health insurance coverage this year. A day after the two main reports were issued, the CDC quietly placed another table on its website. The new table compares estimates from the NHIS and the CPS for the early months of 2014. It reports the NHIS result that 13.1 percent of the population lacked health insurance when they were interviewed in the January through March time period of 2014. But it also reports the CPS estimate that 13.8 percent were uninsured during the February through April interview period.

Antos calls the timing suspect and discusses the reliability and implications of the dueling surveys:


It is no accident that the administration released CDC’s estimates early on September 16 followed shortly by the Census Bureau’s routine report on last year’s insurance coverage, delaying the comparable Census estimates to the next day. Good news about coverage gains drowned out the Census report. The high reliability of the NHIS was front and center in the press coverage. The contradictory evidence from Census was buried. Although the NHIS is a highly reliable survey, the CPS is even more reliable. Its sample is 150 percent larger than that of the NHIS, which means that its estimates have significantly lower statistical variance. If the NHIS is the gold standard, then the CPS must be the platinum standard.

You may recall that the Census bureau recently uprooted decades of tradition by changing its formula for measuring uninsured rates in America, sparking deserved criticism from several quarters.
Why disrupt the system at the precise moment that a massive new health program is coming on line, diminishing the usefulness of the new data by making the established base line obsolete?  Those concerns still stand, but what's surprising is that the initial figures under the new system -- which experts expected to dramatically improve insured rates -- point in the opposite direction, at least for now.  I'm…skeptical of that trend continuing, but those are the hard numbers so far. On the CDC data, an increase in the insured population of 3.8 million is obviously better than a drop of 1.3 million, but it's still remarkably weak.  The Congressional Budget Office projected a surge of 12 million newly insured Americans in 2014, and the administration has been bragging about 14 million "new" "enrollees" between the exchanges and Medicaid expansion.  (Reminder: They've been using dishonest math to significantly inflate both numbers).  Just shy of four million newly insured Americans over, as estimated by the CDC, is obviously a far cry from the administration's stats.  One Obamacare-friendly expert objected that the 3.8 million figure doesn't reflect the big influx of enrollees that happened in March -- a fair point, but Antos responds:


The difference between the NHIS estimate of the reduction in the uninsured count and the administration’s enrollment total is about 10 million. If one assumes that March enrollment would double the number of people who are newly covered by insurance, then one might guess that a survey conducted later in the year would find that the insured had declined by 7.6 million instead of the NHIS’s 3.8 million. But exchange coverage accounts for less than half of the increase in insurance according to the Administration.

There is no indication of a similar surge in Medicaid enrollment, which is permitted all year around rather than being confined to an open enrollment period. If Medicaid enrollment continued at a steady pace, then the NHIS figure should be adjusted to reflect only the exchange surge. That translates to a decline in the number of uninsured of 5.4 million.

That's still a fraction of CBO projections and the White House's politicized estimates.  Speaking of which, HHS announced last week that the current number of exchange enrollees is 7.3 million, down from the much-touted "eight million" number.  How could that official statistic differ so dramatically from the CDC and Census data?  Well, the large majority of exchange enrollees previously had insurance.  They're signing up for Obamacare having lost their existing plans, in violation of the president's promise.  Those people don't count as "newly" insured, except in the administration's imagination.  Also, that 7.3 number does not reflect the hundreds of thousands of ineligible people who are in the process of losing their coverage and/or subsidies, nor does it account for the significant attrition of once-paying customers that major insurers are reporting.  Also, the government's estimates still can't be verified by a functioning "back end" of the federal data hub because it's still being built.  As Bob Laszewski says, we still don't know how many people are actually enrolled in Obamacare. Before you go, be sure to read Philip Klein's recent stories on the two million families who may be impacted by Obamacare's "family glitch" (which we wrote about years ago), and a national survey of doctors -- roughly half of whom assign the new law a 'D' or F.'  Just 25 percent of American doctors give Obamacare an 'A' or 'B.'
Posted by Diane Sori at 12:31 PM