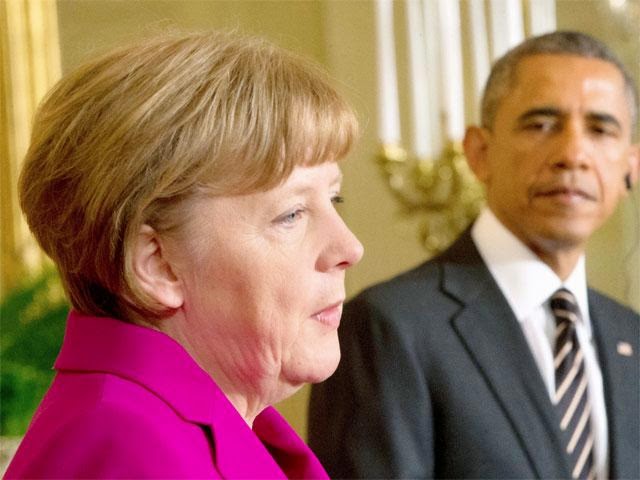 “I don’t want to be coy...the prime minister and I have a very real difference around Iran, around sanctions.”
- Barack HUSSEIN Obama at yesterday's news conference with German Chancellor Angela Merkel

Another Obama news conference yesterday... more Obama lies...more Obama bloviations...blah blah blah ad-nauseum. And while he droned on and on...how that man loves the sound of his own voice...you have to give FOX News some kudos...they cut their coverage of this joint news conference with German Chancellor Angela Merkel off mid-sentence, because instead of addressing the important issues of the day... including the Benghazi hearings and ISIS...Obama tried to keep focus on his anything but truthful job creation numbers and how close he is to reaching a deal with Iran. Thankfully though he was forced to address his planning on getting us involved in Ukraine's war with Russia as well as his continuing to stab Israel and Prime Minister Benjamin Netanyahu in the back.

Now while Merkel...who is due to meet with Russian President Vladimir Putin and Ukrainian President Petro Poroshenko this Wednesday in Minsk...truly hopes that diplomacy alone will get Putin serious about the peace talks moving forward, Obama of course had to throw his two-cents in. Saying, “We are united in our determination to impose costs on Russia for its actions, including through coordinated sanctions,” Merkel disagreed with Obama and told him that only if talks fell apart would she consider having Germany place addition sanctions on Russia.

And by the way...this smart woman knows that sanctions do NOT really work...while Obama NOT only wants more sanctions placed on Russia, but said that he is seriously considering arming the Ukrainian rebels with “lethal defensive weapons” to use in their battle against pro-Russian separatists...translation: getting the U.S. involved in yet another sovereign country's civil war...this time with a country fighting Russia...fighting Putin. And again he would be doing so with our taxpayer dollars...thus diverting much needed dollars away from fighting the muslim islamist terrorist group known as ISIS...so of course he will get the U.S. involved in Ukraine.

I guess...NO...I know...Barack HUSSEIN Obama still has NOT learned two important lessons...first, he himself is NO match for the 'Russia Bear'...and second, that he still refuses to see let alone say that radical islam in the guise of ISIS and other such terrorist groups are indeed the true tangible enemy the U.S. faces today...the Ukraine is NOT...that is unless he goes all-out and declares war against Russia...something that would be very unwise to do.

“Arming the rebels will lead to more victims” and while “I understand the debate I believe that more weapons will not lead to the progress Ukraine needs,” Merkel... who has both publicly and in interviews said she is against providing Ukraine with any weapons to fight separatists in its east...said supplying weapons will just add to the the toll in lives lost as well as serving to escalate the war...and how right she is. And being that Merkel is one of the few world leaders who still has a 'cordial' relationship with Vladimit Putin, she understands his mindset as to what he is doing and why he is doing it so much better than Obama ever could. And by Obama's strongly insinuating that he will have the U.S. unilaterally arm the rebels if need be...in a misguided attempt to force Putin back to the peace table...just know that this action is doomed to fail because all it will do is have Putin arming his side with even more weapons...with even more powerful weapons...thus forcing a checkmate if you will...and the loser in this game will again be the Ukrainian people. 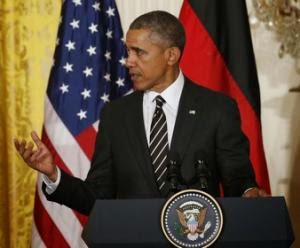 So as we are on the verge of yet another Obama failed foreign policy event...and as the tension between Obama and Merkel was clear for all to see...Obama bloviated on that as President his top priority will be to do everything that he can to “create more jobs and opportunity for hardworking families -- for our economic strength is a source of strength in the world." Heaven help the world is all I can say for this following statement of his is riddled with nothing but cleverly hidden inaccuracies that affect NOT only the U.S. economy but the global economy as well. “This morning, we learned that our businesses created 273,000 new jobs last month. All told, our businesses have now created 9.2 million new jobs over 50 consecutive months of job growth.”

First...According to the Bureau of Labor Statistics 257,000 new jobs (non-farm payroll employment) were created in January NOT the 273,000 jobs Obama claimed. And Obama totally ignored the fact that there are still 3,079,000 fewer people employed now than in January 2009 when he first took office. Remember too that the monthly jobs report states net job growth and/or loss NOT 'true' numbers. In fact, the unemployment rate actually rose to 5.7 % from the hoped for staying at 5.69% with the number of those unemployed actually increasing by  291,000, and that was one number Obama chose to completely ignore when addressing the press. After all, this is the man who loves to pretend the number of people who have stopped looking for jobs as well as those demoted to part-time employees just does NOT exist.

And when you add the number of part-time workers into this mix, this translates into underemployment numbers increasing from 11.2% in December to 11.3% in January. And while those now working part-time for economic reasons...folks who lived comfortably as a one-income household before Obama took office...increased by 20,000 during the month of January with part-time workers overall increasing by 40,000...note that the key words are 'part-time' NOT the much need 'full-time' numbers that would indicate a true economic recovery.

Such is the true reality in today's sad economy with Obama at America's helm. And when you consider that now floods of ILLEGALS will soon be competing for the few jobs there are, you can expect these unemployment numbers for 'true' American citizens to fluctuate wildly...and NOT for the better. But hey, Obama had to pat himself on the back as he stood before the cameras even though he knew damn well that he was lying through his teeth...guess he and Brian Williams operate from the same playbook.

And when he ever so briefly touched upon the all-important issue of Iran, Obama tried to poo-poo speculation that further extensions of the Iran nuclear talks were in the making. And in an effort to counter pressure from both Benjamin Netanyahu and Congress to increase sanctions on Iran even before negotiations are completed Obama asked, “What’s the rush?” Saying that the P5+1 is ready to present Iran with a deal...a deal that would allow them to become a 'peaceful' nuclear power, while at the same time giving the international community “absolute assurance, that is verifiable, that they are not pursuing a nuclear weapon,” Obama, while he tries, is fooling NO one.

Fooling NO one for Obama knows damn well that nuclear power of any kind equates to nuclear weapons for Iran as Iran...masters in the islamic art of taqiyya and a country rich in oil who does NOT need nuclear power to meet its people's energy needs...cannot be trusted to stay in the 'so-called' and quite laughable 'peaceful' nuclear power business alone. And anyway, if truth be told Obama wants Iran nuclear armed so they can, when the time is right, wipe Israel off the map...or try to anyway...and thus bring his dream of the Levant to fruition. 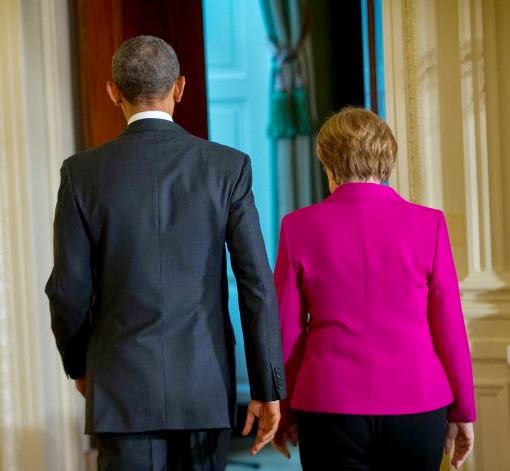 And when asked about Netanyahu’s planned address to Congress next month, Obama first and foremost out-and out lied when he said that Netanyahu was out of line in having sought to address Congress two-weeks before Israeli elections...the fact is that John Boehner invited him and originally his address was to be in February....adding that it would be...in his own word...”unusual” for him as president to meet with any world leader right before they faced an election. And we all know this is nothing but double-speak as Obama had NO problem meeting with European leaders two weeks before his own presidential election.

So when all is said and done, yesterday's news conference, even with Chancellor Merkel standing by his side, turned into just another one of Obama's delusional lie-fests but as always the sheeple will lap it up...sad isn't it but yet so sadly true.
Posted by Diane Sori at 12:03 AM