Op-ed:
A Surrender of Epic Proportions
By: Diane Sori and Craig Andresen / Right Side Patriots on CPR Worldwide Media / http://cprworldwidemedia.net/radio

In timing eerily reminiscent of the start of the '67 Yom Kippur War, yesterday, after a one-day extension, as both Passover and Good Friday were mere hours away, suddenly and miraculously a preliminary deal...a ‘framework’ for moving Iran closer to becoming armed with nuclear weapons... has been reached. And it was reached quite coincidentally as most of the deal-contesting P5+1 members had already gone home to their respective countries.

And so it seems that Barack HUSSEIN Obama has gotten his wish of selling out both America and Israel to those wishing to kill us all as both John 'Swiftboat' Kerry and the Obama regime itself further bow down and make concessions to the demands of Iran...demands which should leave nobody wondering just exactly who, in all of this negotiating, has been calling the shots.

NOT quite negotiating puts it mildly as Iran had recently demanded that all sanctions against them be lifted, especially those that had been most effective in crippling their economy and that the near decade of imposed watching over their nuclear program by the IAEA also be eliminated as a term of any ‘deal’ to be reached. Other demands made by the Islamic Republic of Iran have included that they not be forced to send their already refined and stockpiled uranium to Russia for 'safe keeping' if you will...to keep it from being used and incorporated into nuclear weapons.

What should have been a deal breaker...Iran’s statement that “the destruction of Israel is non-negotiable” seems to have been simply and completely ignored by Kerry and the Obama regime.

And all this amounts to a total capitulation and sellout to Iran who has been manipulating these talks from day one. And in a joint statement...an Iranian victory statement...issued by both Iranian Foreign Minister Javad Zarif and EU Foreign Policy Chief Federica Mogherini...key parameters to restart the drafting of facts and plans of actions by the June 30, 2015 pre-set deadline were announced. And these parameters include that there will be no fissile material at the underground Fordow facility...a facility which will remain open as a research and nuclear physics lab...and that its spent fuel will be exported. Also, the IAEA will be allowed access to all past and previous nuclear documents, but notice no access to specific key sites was spoken about. And Iran gets their chief demand in that there will now be a total release from banking and oil sanctions by the European Union and the U.S. will stop all applications of our current sanctions and place no new sanctions on Iran, while at the same time the agreement will be endorsed by a U.N. Security Council resolution along with the sanctions being lifted on the front end of the agreement.

And the media continues to play down a detail of utmost importance...and that is while Iran will cutback its installed uranium enrichment centrifuges by 2/3 and will only be allowed to enrich uranium at the Natanz facility... translating into them being allowed to keep operating 6,104 centrifuges...a detail which will still allow a breakout period of under one-year. And adding to this is that Iran will not be required to lockdown or dismantle any of its other existing nuclear facilities and this is key folks...while Iran will not be allowed to enrich uranium at 'advanced' centrifuges for 15 years nothing has been said about their enriching uranium at already in existence not to be dismantled centrifuges.

And these general parameters are but for ten years...while all the parameters are nothing but a surrender by Obama of epic proportions leaving Israel to stand alone against Iran. 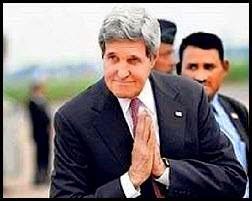 And lest we forget that over the past few days, information garnered by Iranian defector Amir Hossein Mottaghi, a media aide to Iranian President Hassan Rouhani, made it clear that Kerry’s role in these negotiations was nothing more than to speak on Iran’s behalf to the rest of the P5+1, leaving one major question looming large...why should Iran be trusted. Iran, after all, says they have no obligation to observe or abide by any deals or treaties struck with infidels but there is more...much more...

Any ‘deal’ with Iran that comes to fruition in June or at any other time for that matter, a ‘deal’ which we all know Iran cannot be trusted to abide by as Iran’s goal is to have nuclear weapons is...in fact...illegal. In 1969, the U.S. along with some 189 other countries, signed the Nuclear Non-Proliferation Treaty...a treaty which can only be altered by conference of all parties and a treaty to which any and all alterations must be by consent of all...each and every country which signed the original treaty in 1969.

And Iran is one of those original signatories.

Simply by their building centrifuges and beginning the process of refining uranium, Iran has already violated the terms of the Nuclear Non-Proliferation Treaty to the point where the U.N. has imposed sanctions on them...sanctions which in accordance to this new ‘framework’ will be lifted post-haste right along with all U.S. imposed sanctions.

So how did these negotiations get this far with Iran already in violation of the Nuclear Non-Proliferation Treaty. Simply...the P5+1, under the demands of Iran and the cowering of Kerry and the Obama regime have, it seems, in and of its own accord, amended the Nuclear Non-Proliferation Treaty on Iran’s...not any other nation’s...behalf. That is a move that flies directly in the face of the rules of that treaty.

Does the Nuclear Non-Proliferation Treaty allow for a signatory to develop nuclear power programs...yes, but only if the terms of the treaty are met and abided by in that those countries are not allowed to spin uranium for fuel rods and that they must also abide by IAEA restrictions...restrictions which include facility inspections.

Iran has already begun the process of using their centrifuges to refine uranium and facility inspections are still in question.

Obama said yesterday that this 'deal' is not a ‘deal’ between his administration and Iran but between Iran and the world. As Iran has clearly already violated a ‘deal’... the Nuclear Non-Proliferation Treaty between itself and the world...what would lead any entity on earth to believe that Iran would not simply violate this ‘deal’ in exactly the same manner.

As stated above, the Islamic Republic of Iran feels it has no obligation to abide by deals or treaties struck with infidels.

Obama had a far different question that he posed during a press conference regarding the ‘deal’ yesterday...“When you hear the inevitable critics of the deal sound off, ask them a simple question: Do you really think that this verifiable deal if fully implemented, backed by the world’s major powers, is a worse option than the risk of another war in the Middle East?”

Our answer comes in two parts...first...we would refer supporters of this deal to the seventeen U.N. resolutions violated over a twelve-year period by Saddam Hussein’s Iraq which, as we now know all too well led to Iraq’s WMD program... chemical weapons which Bush’s critics claimed never existed but have since turned up in the thousands of tons at an al-Muthra facility in Iraq...chemical weapons now in the hands of ISIS...and second, when you hear Obama and his islamic supporting regime sound off ask them why should we believe them any more than we believe that Iran will abide by any ‘deal’ or its terms.

If Iran violates this ‘deal'...and know they will...the U.N...which is so highly touted by Obama...has a long history of inaction other than to impose yet another resolution. Why would they act differently in this case, especially since Iran has already violated the Nuclear Non-Proliferation Treaty and has now been rewarded by the U.N. for their efforts...simply they would not.

And while Kerry says that the drafting of a final deal is to start immediately what say Benjamin Netanyahu to this abomination of a 'deal'...Netanyahu said he believes the 'deal,' which still must be finalized in the coming months, will leave too much of Iran's nuclear infrastructure intact.

Saying, "Any deal must significantly roll back Iran's nuclear capabilities and stop its terrorism and aggression," Netanyahu believes that the deal reached will leave Iran just months away from the point where it could make a nuclear bomb. And Netanyahu also pointed to Iran's support for islamic militants across the region and its development of long-range missiles as a cause for great concern.

And while Israel's Intelligence Minister Yuval Steinitz, who oversees the monitoring of Iran's nuclear program, said the deal was "disconnected from the sad reality" of the region, and added that, "Since the declaration is far from being a real agreement, we will continue in our efforts to explain and persuade the world in the hope of preventing a bad agreement, or at least to insert corrections and improvements,” Obama, in a press conference immediately after the deal was announced, crowed about measures aimed at rolling back (but not eliminating) Iran’s nuclear program. And he did so as Iran’s chief negotiator spoke out about the ‘deal’ stating,“None of those measures include closing any of our facilities. We will continue enriching; we will continue research and development. Our heavy water reactor will be modernized and we will continue the Fordow facility. We will have centrifuges installed in Fordow, but not enriching.”

And so the bottom line is this...Obama has not nor is he negotiating any sort of nuclear ‘deal’ with Iran. What he is negotiating is our, and the world's, surrender to the Islamic Republic of Iran...a surrender of epic proportions.
Posted by Diane Sori at 12:00 AM