Two Issues...One Comical and One Quite Serious
By: Diane Sori / The Patriot Factor / Right Side Patriots on americanpbn.com/

Last week two items of some interest made the news rounds...one quite laughable but quite apropos and the other quite serious in nature. So lets move into the week with the laughable issue first for no other reason than we do need a good laugh every so often, and most especially during this anything but normal election cycle.
Now let me begin by asking you my dear reader what do David Duke of KKK infamy...loony-toon heavyweight boxer Mike Tyson of ear-biting fame... basketball player and wanna-be diplomat (sarcastically said) Dennis Rodman... and the conspiracy theorist ex-governor Jesse Ventura, defamer of American sniper hero Chris Kyle...all have in common with North Korea's man-child with a screw loose dictator Kim Jong-un...drum roll please... these most despicable of men have all endorsed the anything but a Republican or a Conservative, Donald J. Trump, for president.
And these endorsements are endorsements any sane person would quickly disavow but not our boy Trump, and hearing totally mad and quite brutal dictator Kim Jong-un saying Donald J. Trump isn't "screwy" and is a “wise choice” for president truly does take the proverbial cake. And this glowing endorsement comes right on the heels of Trump saying that he would oh so “love” to have a “friendly chat” with the North Korean dictator about, of all things, nuclear weapons. Sounds like shades of Obama's 'very bad' nuclear deal with America-hating Iran now doesn't it.

I really don't think a“friendly chat” with the very dictator who enslaves over a million of his people and who supplies Iran with nuclear materials and payload carry technology is a good idea...I mean seriously not a good idea as a “friendly chat” will accomplish not a thing of substance...in fact both the Democrat and Republican hierarchy think this is insanity at best. And now with North Korea having added the icing on the above said proverbial cake by their recent launching of a propaganda website hailing Trump as "a prescient presidential candidate" who can “liberate” Americans living under daily fear of nuclear attack by the North...daily fear of rockets that when launched go 'splat' I think not...you just have to wonder what Trump was thinking...as in what's really in it for Trump for wanting to sit down and have a “friendly chat” with a madman...perhaps Trump Tower Pyongyang.
And the kudos keep coming from this totalitarian regime shrouded in mystery and secrets as witnessed by a column written by Han Yong Muk in North Korea's DPRK Today's state controlled news site which stated, and which I find to be quite laughable, is that Donald J. Trump is a “wise politician” and “far-sighted presidential candidate” who will help Kim Jong-un with his goal of “Korean unification,” and who is “the right choice” for U.S. voters come the November election. Continuing with words stating that there are many “positive aspects” to Trump’s “inflammatory policies” Han Yong Muk claims Trump said “he will not get involved in the war between the North and the South” to which Muk himself added that “isn’t this fortunate from North Koreans’ perspective?”

And to which I say oh really...fortunate for rogue nation North Korea and it kind of goes along with Trump saying that he will remain “neutral” in the Israeli/Palestinian conflict. And what a pesky little fact Trump chooses to forget with that ridiculous statement is that both South Korea and Israel are our allies...North Korea and the made-up people called Palestinians...Hamas and Hezbolla controlled Palestinians whose protector and arms supplier is America's enemy Iran...are not.

So it's “fortunate” all right...fortunate like a very stale and old fortune cookie minus the fortune.
And while in his column Muk also warned Americans not to elect Hillary as our next president, that being the only thing he got right, what Muk forgets is that by electing Donald J. Trump president...especially with that above said inane comment of his...proves just what I've been saying all along...Trump is Hillary just dressed in a different 'Made in China' pants suit.

So now that we've had our good laugh let's move on to a serious issue that truly affects us here at home...last Friday's reported “dismal” jobs numbers. 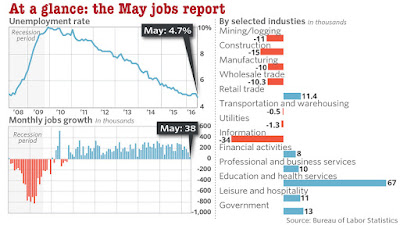 Dismal jobs numbers indeed as employers drastically slowed their hiring almost to a stop in May after estimates had projected around 160,000 new jobs would be created. But the sad reality is that only 38,000 jobs were created, the weakest showing since 2010, which translated into the even more dismal fact that our economy barely grew in the first three months of this year. And barely puts it mildly as our economy showed just a basically stagnant 0.8% percent growth rate in the January through March quarter. Now add in that the Labor Department revised down employment gains for the previous two months by 59,000...more on that in a bit... and dismal takes on a new meaning now doesn't it.

And while Obama goes around tooting his horn about how wonderful our economic recovery is going...and as he tries to puff himself up with the fact that the unemployment rate did indeed actually fall from 5% to 4.7%...which is the lowest it's been since November 2007...what he is of course not telling 'We the People' is that the rate fall was simply due to the fact that almost half a million out of work Americans totally and completely stopped looking for work, even part-time work, and therefore were no longer 'officially counted' as unemployed thus making the unemployed rate number seem better than it actually is.

Translation...Obama and crew are lying to the American people yet again.

And while consumer spending actually increased in April...including the buying of automobiles and other high-ticket items coupled with the sale of new homes reaching an eight-year high...it did nothing to alter the reality that the all-important jobs numbers are dismal at best. In fact, both March and April's previously stated numbers... numbers Obama was quick to herald...were revised down from what was originally stated. April's rate revised down to just 123,000 jobs created from the initially reported 160,000, and March's rate fell from the first reported 208,000 jobs created to the actual figure of 186,000 jobs created.

And this means that just an average of 116,000 jobs were created in the past three months, down from an average of 230,000 jobs created during the same time period from the previous 12 months ending in April. And this further translates into the fact that while this recent six-month period saw 2.4 million workers enter the labor force, the overall population of those working or actively seeking work fell by 458,000, in addition to the fact that the number of workers employed part-time...workers who would rather work full-time...rose by 468,000 in May, after holding roughly constant since November.

Not good folks...not good at all.

And while some leading economists like Stuart Hoffman, chief economist of PNC Financial Services Group, try to say...to cover for Obama's weak economic polices in my opinion...that job growth is expected to slow somewhat now that the economy is approaching what's called 'full employment,' and while chief economist Mark Zandi, of Moody’s Analytics, says the latest jobs numbers “significantly overstates the slowdown,” the fact is that there are fewer available workers to fill job openings...remember the above stated almost half a million Americans who have stopped looking for work...thus translating into a slowing in hiring. And reports also show that employers are struggling to find high-skilled workers, a problem they’ve faced for a number of years because of mismatches between job requirements and the so-called 'talents' of laid-off employees.

And it gets worse as the blame game has set in...a blame game that includes the weather; stock market turbulence and fluctuation, political uncertainty (because Donald Trump is calling for tariffs on China and lowering taxes which many employers and company CEOs fear will start a trade war and which will also result in a bigger, much bigger, budget deficit); the weak economy itself; the now settled Verizon strike which had 35,000 out of work; and the 11,000 mining jobs lost since the collapse in oil prices. But even if you add these two figures back in that would still only mean that 84,000 new jobs would have been created out of the expected 160,000.

Dismal indeed and it gets worse.

After Friday's report was issued the dollar fell to a three-week low...down 1.7% at 93.96 and losing against the euro, the yen and other major currencies...probably negating any chance for a rate increase from the Federal Reserve this summer, thus heightening worries about a possible general slowdown in global growth. And remember, higher interest rates tend to boost the dollar, as they make the currency more attractive to yield-seeking investors, something we so desperately need right now.

Also remember that this dismal report affects economic growth outside the U.S. as perceptions, both real and imaginary, can and most likely will have some leading traders abandoning assets perceived as 'risky' turning instead to what's referred to as 'safe-haven' investments such as gold, Treasury's, and the Japanese yen.

And the simple fact is that when you have numbers this dismal coupled with the revising down of the March and April numbers, serious concerns must be had as to the nature of a true and lasting economic recovery happening along with a corresponding and a forward moving upswing becoming the norm. But the sad reality is that can only happen with an increase, not a decrease, in jobs numbers. And only a continuing increase will be the much needed catalyst to encourage those who had left the jobs market to come back and look for jobs.

So now as we wait to see what the Federal Reserve will finally do, but in all honesty I do not see any true moving forward in either the jobs numbers or in a generalized economic growth until after the November election when things settle down and we know which direction economically we will be heading...as in a Hillary free-for-all give-away or a Donald J. Trump trade war. And neither scenario really looks to promising now does it.