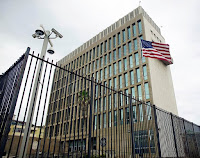 It sounds sort of like a mass of crickets. A high-pitched whine, but from what? It seems to undulate, even writhe. Listen closely: There are multiple, distinct tones that sound to some like they are colliding in a nails-on-the-chalkboard effect.

The Associated Press has obtained a recording of what some U.S. Embassy workers heard in Havana in a series of unnerving incidents later deemed to be deliberate attacks. The recording, released Thursday by the AP, is the first disseminated publicly of the many taken in Cuba of mysterious sounds that led investigators initially to suspect a sonic weapon.

The recordings themselves are not believed to be dangerous to those who listen. Sound experts and physicians say they know of no sound that can cause physical damage when played for short durations at normal levels through standard equipment like a cellphone or computer.
What device produced the original sound remains unknown. Americans affected in Havana reported the sounds hit them at extreme volumes.