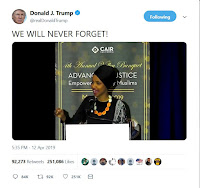 "Some people did something..." so said Minnesota Rep. IIlhan Omar. And YES..."some people"...Omar's people... Omar's brethren...did do something, and as of today that "something" has led to an additional 34,866 deadly terror attacks since 911.

And by the way Rep. Omar, CAIR...the Council on American-Islamic Relations...was NOT founded after 911 as you claim in your speech, but was founded in June 1994 by Nihad Awad as a non-profit NGO whose sole purpose was "muslim activism."

The lies you tell to push forward your pro-muslim, anti-American, anti-Israel agenda knows NO bounds it seems. Time for you to be "expelled" from Congress...and YES...Congress has the power to do so. Now if only Congress had the guts to do what even they know in their hearts needs to be done both for our country's and "We the People's" sake.

Thank you President Trump for standing up for those lost by publicly calling out this ungrateful, dishonorable, hateful piece of traitorous trash...you once again did America so very proud.

Email ThisBlogThis!Share to TwitterShare to FacebookShare to Pinterest
Labels: "some people did something", 911, CAIR, Ilhan Omar, muslim activism, President Trump