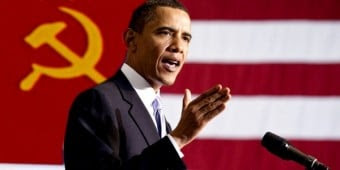 The Communist Party USA isn’t always happy with the Democrats, but in the 2012 election, its chairman says, the best bet for advancing the Party’s goals is to back Barack Obama.

In a report called “Defeating the Rightwing on the Road to Socialism” delivered to the CPUSA annual conference, Party Chairman Sam Webb moved to squash sentiments that disgruntled communists should jump off the Democrat ship and back a third-party candidate for president.

“Some think the Democrats are as bad as the Republicans. Others go further and say that the Democrats are worse because they create popular illusions that change is possible within the two-party system,” Webb said. “And finally there are advocates of running a third-party presidential candidate in this election.

“I can understand these sentiments, but only up to a point,” he said. “Like it or not, millions go to the polls in spite of their misgivings … and the Democratic Party is the vehicle of reform for tens of millions, the majority of whom are working and oppressed people.”

“A third-party presidential candidate would only help the extreme right, as well as isolate the left from the broader movement,” Webb strategized. “Only a closer alliance of a surging labor movement and its strategic allies – the African American people, Latino people, and other peoples of color, women and youth – have the wherewithal to turn back this corporate counterattack, while at the same time enact progressive measures.”

Other speakers at the conference threw their support behind Obama even more succinctly, including Executive Vice Chair of CPUSA Jarvis Tyner.

“These right-wing nut jobs need to understand, we are not going back,” Tyner said. “If Obama is elected, of course there will be a struggle; a struggle that the democratic forces could win, I would say. If he is defeated, the movement will suffer a big setback and the country will be pushed backwards.”

According to a report in CPUSA’s news source People’s World, Vice Chair Juan Lopez warned conference attendees that Republicans would use racism as a “powerful ideological weapon” to defeat Obama.

“There is no room for cynicism,” Lopez stressed, “if we expect to win against Republicans who are exhibiting fascist tendencies. The defeat of Obama would be a dangerous setback on every front of struggle, especially against racism and for equality for women. It would show that white people were not ready for an African American president, after all.”

Joelle Fishman, chair of the CPUSA Political Action Commission, further contrasted Obama and his “values … upholding the contribution of work and those who do it,” and Mitt Romney, who allegedly values “individualism and corporate greed.”

“The poll shows there is a lot of work to be done,” Fishman trumpeted, “but with a strong platform for jobs and fair taxes, Obama and Democrats can win voters in swing districts, including white voters who supported the tea party in 2010.”

Fishman and Webb each remarked on labor-union plans to put huge ground forces in play for the 2012 election and encouraged fellow communists to join, rather than fight, the efforts.

“Labor will throw itself into the campaign to elect Democrats, moderate as well as progressive,” Webb told the conference.

“The AFL-CIO grass roots crusade will engage 400,000 members to canvass their co-workers and neighbors with a unity message for Obama. SEIU will mobilize another 200,000 members with the same goal,” Fishman claimed. “Strengthening and enlarging union, civil rights, community and youth organizations during this election will lay the groundwork for year-round organizing and for future elections in which candidates who come out of the movements, including the Communist Party, run for office.”
Posted by Diane Sori at 10:31 PM