This isn’t a trick question. Even though I’ve presented both theoretical and empirical arguments against government spending, that doesn’t mean every government program is a failure.

I suppose the answer depends on the definition of success.

Government roads do enable me to get from Virginia to Washington every day. And the Post Office usually gets mail from one side of the country to another. By that standard, many government programs and activities yield positive results.

But if the question is whether government achieves anything in a cost-efficient manner, you’re probably better off searching under your bed for unicorns.

If you pose this question to someone on the left, however, don’t be surprised if they point to Head Start. The conventional wisdom in Washington is that this program gives low-income kids a critical leg up before they start school.

I would like this to be true. I may not be fond of big and bloated government, but the best interests of these kids are more important than my desire for a talking point against the welfare state.

So what does the evidence say? 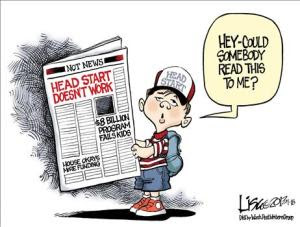 Here’s what the Washington Examiner wrote about the program, starting with an explanation of what the program is supposed to accomplish.

There are few institutions more sacrosanct in Washington than President Johnson’s Head Start program. The federal government spent more than $7.9 billion on the program in 2012 alone to provide preschool services for nearly 1 million low-income Americans. The program represents everything that is supposedly great about the liberal welfare state. It redistributes resources from wealthy to poor. It uses the power of the federal government to combat inequality by giving poor and minority students an educational boost before they fall behind their wealthier peers. There’s just one problem: It doesn’t work.

Is that an empty assertion? Nope, it’s the evidence from the government’s own research.

The ongoing randomized study of Head Start was based on a nationally representative sample of 5,000 children who applied for the program in 2002. Approximately half of the subjects received Head Start services, while the other half did not. The students were then tested on their language, literacy, math and school performance skills. …the 2010 Head Start Impact Study report notes, “the benefits of access to Head Start at age four are largely absent by 1st grade for the program population as a whole.” Specifically, the language, literacy, math and school performance skills of the Head Start children all failed to improve. …Now, the HHS has finally published a follow-up to its 2010 study that follows the same children through the end of third grade. And again, the HHS has concluded that Head Start is ineffective, concluding that Heat Start resulted in “very few impacts … in any of the four domains of cognitive, social-emotional, health and parenting practices.” And those impacts that were found “did not show a clear pattern of favorable or unfavorable impacts for children.”

So what’s this costing the nation (above and beyond the failure to improve the lives of children)?

Since 1965, the federal government has spent $180 billion on Head Start. …Does that sound like a program you’d want to spend $8 billion on next year?

Now imagine the good things that would have happened if that money was left in the economy’s productive sector.

Or, if you like government, but at least want good results, imagine the good things that would have happened if state and local governments shifted $180 billion from the failed school monopoly into genuine school choice programs.

But let’s close on an optimistic note. As far as I know, there’s no evidence that Head Start actually damages children. It’s just wasted money.

That’s a much better track record than other welfare state programs.
Posted by Diane Sori at 2:42 PM