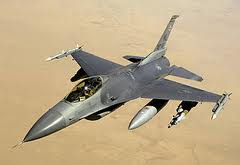 Arming our enemies with taxpayer dollars
By: Diane Sori

While we patriots have been busy keeping abreast of the important issues like Hillary's testimony, Obama's wanting to take away our guns, and four traitors being appointed to cabinet positions, the msm keeps trying to get us to focus on the oh so NOT important news of did Beyonce lip-sing at the inauguration (gag)...so that we wouldn't make a big deal of Barack HUSSEIN sending four F-16 fighter jets to Egypt as part of a previously promised foreign aid deal.

Well guess what...I'm going to make a BIG deal of it.


Sending those four fighter jets to Egypt is just the tip of the iceberg of what Obama intends to send them. Back in 2010, Obama made a deal with then Egyptian President Hosni Mubarak, a longtime US ally, promising that by the end of 2013, 16 fighters jets and 200 Abrams tanks would be sent to Egypt. But then Murback's government fell to the Muslim Brotherhood supported Mohammed Morsi who assumed power in a rigged election.


And with the Muslim Brotherhood now in control of Egypt, Obama is still going ahead with the 2010 deal (which included the fighter jets and tanks) even while knowing that Morisi is NO friend to America or to Israel. (Morisi has even publicly spoken of NO longer honoring the Camp David Accords.)
In fact, Morsi, an avowed islamist who wants to turn Egypt into a islamic state complete with sharia as law of the land, has ordered that hatred of Jews be taught to all Egyptian school children.

“Dear brothers, we must not forget to nurse our children and grandchildren on hatred towards those Zionists and Jews, and all those who support them,” Morisi said. “They must be nursed on hatred. The hatred must continue.”

Kind of obvious where Morisi intends to point these fighter jets now isn't it and Obama will look away...or he might even give Morisi coordinates on exactly where to aim them.

Morisi and the infamous Muslim Brotherhood are indeed an enemy to both America and Israel but not to Barack HUSSEIN Obama as he outwardly sides with and supports them every chance he gets. By giving these terrorists all the money and weapons they want, through deals like this, Obama is actually helping to aid them in their quest to make the Middle East Jew and Christian free...for bottom line...that is their goal and Obama knows it.


And making Obama's current Egyptian deal even worse is that it's our taxpayer dollars that are being used to 'aid and abet' this dangerous Morisi/Muslim Brotherhood regime. In fact, after Egyptian dissidents, terrorists, and thugs overthrew Mubarak and put Morisi into power, Obama pledged an additional $1 billion to aid Morisi's new government in a transition to democracy...like democracy was ever on Morisi's or the Muslim Brotherhood's mind.

Our taxpayer dollars are being used to aid the Muslim Brotherhood...I cannot stress that enough, and Barack HUSSEIN Obama is willingly and knowingly giving it to them.

So what does Congress do knowing who's now in control of Egypt...they do NOTHING. And even though many in Congress called for ending foreign aid to Egypt, they still did NOTHING. Even when national polls showed that 42% of Americans supported cutting the amount of aid to Egypt, and 29% supported cutting off ALL aid to now Muslim Brotherhood controlled Egypt, they still allowed the deal to go through.

And when two weeks after the US Embassy in Egypt was attacked by terrorists (around the same time as Benghazi) Obama gave Morisi an emergency additional $450 million in aid, and Congress did NOTHING to stop this.

So why doesn't Congress act when everything Obama does is done to empower and aid our enemies...why do they do NOTHING to defund these ventures...why when all this is just added proof of where Obama's true allegiances lie for Morisi does NOT hide the fact that his government is most decidedly anti-American and anti-Israeli...why...

I'll tell you why...it's because NOT one person in Congress has the guts, courage and fortitude to say NO to Obama and his band of thugs.  NOT one person in Congress has the guts to call for the ARREST of this man for aiding and abetting the enemy.  Is it fear of the race card that stops them...is it fear of losing their cushy jobs and perks...who knows.  But what I do know is that Obama is NOT stupid...he knows this cowardly Congress will do NOTHING to stop his anti-American agenda...he knows he can plan America's demise as he threatens to take away the weapons of law-abiding Americans while freely giving weapons, including F-16 fighter jets and Abrams tanks to our enemies.

Our forefathers must be turning over in their graves...for how far we've fallen under the stewardship of Barack HUSSEIN Obama...a man far removed from the Founders vision of a leader...a traitor to everything they held dear.
Posted by Diane Sori at 12:03 AM