One year ago, I looked at the worst policy developments of 2012.

I had some very good (or should I say bad?) options for that award, including the Supreme Court’s Obamacare decision,

I ultimately decided, perhaps for selfishly sentimental reasons, that the worst development was repeal of the flat tax in Slovakia and the Czech Republic.

And because I try to be optimistic, we’ll start with the good news.

But remember the rules. We’re looking at policy rather than politics.

I know, for instance, that one of my favorite posts in 2013 was the one about Reagan crushing Obama in a hypothetical matchup, but that’s obviously not a policy development.

So what are my choices?

Potential examples of good news include the fact that very little legislation was enacted during the year, the sequester (while it lasted), the overwhelmingrejection of class-warfare tax policy in Colorado, and the government shutdown.

Those are all good options, but I think these three developments rank the highest.

1. Obamacare – You’re probably thinking I’m on drugs since Obamacare is listed as good news, but bear with me because I’m engaging in some one-step-backwards-two-steps-forward analysis. More specifically, I think the President’s signature “achievement” has done more than anything else in recent years to discredit big government. I also think the flop of Obamacare has rejuvenated interest in – and support for – the types of policies that would make health care system more affordable and efficient. I’ve always feared that undoing the damage of government intervention in the health sector was our most intractable challenge, but Obama may have given us a path forward and that is worth celebrating. By the way, theDetroit bankruptcy is good news for the same reason. Maybe, just maybe, some people will learn the right lessons when statist policies spectacularly fail. 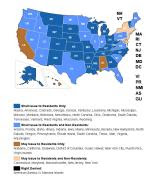 2. The defeat of pro-gun control politicians in Colorado – I don’t think many people will argue when I say that nothing matters more to politicians than getting reelected. And that’s why I am so happy that two Colorado state senators were kicked out of office because of their votes to impose gun control. And that was then followed by theresignation of another state senator who wanted to avoid the same fate. There aren’t many certainties in life, but I can assure you that pro-gun control politicians all across the nation noticed what happened to these Colorado thugs and are now much less likely to push anti-second amendment initiatives. More broadly, we can feel somewhat optimistic that the right to keep and bear arms has never been in a stronger political position.

3. Spending restraint – This hasn’t gotten nearly as much attention as it deserves, but the federal budget in 2013 was actually smaller than the federal budget in 2012. And I’m using honest math, not the Washington approach of calling an increase a cut because the budget might have grown even faster. Indeed, the nation actually has enjoyed a two-year spending slowdown that substantially reduced government spending as a share of GDP. In other words, my Golden Rule was in effect! If we could maintain this approach for a few more years, we’d quickly have a balanced budget and hopefully kill off any pressure for tax hikes.

Feel free, by the way, to offer your suggestions in the comment section. Maybe the best news of 2013 was something that I neglected to cover.

Now let’s look at the other side of the ledger.

Potential bad news stories might include the IMF coercing/bribing Albania to get rid of its flat tax, the easy-money policies of the Federal Reserve and European Central Bank, the 100th anniversary of the income tax, the global shift to higher tax rates, the seemingly permanent drop in the employment-population ratio, and the fiscal cliff tax hike from last January 1.

Geesh, that’s a depressing list. But there are three options – in my humble opinion – that are even worse.

1. Obamacare – I realize I listed Obamacare as one of the best developments of 2013, but it also has to be one of the worst. The legislation is a toxic stew of spending, taxes, regulation, cronyism, and intervention, and it was based on the absurd theory that you solve government-caused problems by adding even more government. And even though Obamacare has discredited big government and opened the door to real reform, we can’t dismiss the possibility that the law will survive and created more dependency.

2. Erosion of the Rule of Law – One of the defining features of a civilized society is the rule of law. Heck, even if laws are bad, it’s still important for people to know that there are rules and that the government is constrained by those rules. That’s the basic difference between the developed world and the types of despotic rule you find in developing nations (with Argentina being a tragic example). Unfortunately, the Obama White House seems to think that it can arbitrarily change laws or ignore laws simply based on the President’s ideological whims or political needs. This has happened over and over again with Obamacare, but the problem extends to many other issues.

3. Murray-Ryan budget deal – Since I thought the sequester was one of the good things that happened in 2013, you won’t be surprised that a law designed to evade the sequester would make the list of bad policy developments. The budget pact between Paul Ryan and Patty Murray allowed more short-term spending, much of it financed by back-door tax hikes. I’m the first to admit that the spending hikes and tax increases were relatively small compared to the size of the federal Leviathan, but what’s really depressing about the Murray-Ryan deal is that it probably sets the stage for future bad agreements. And this Charlie Brown cartoon shows what frequently happens when Republicans and Democrats decide to negotiate on fiscal policy.

Once again, feel free to offer your suggestions for the worst development of 2013.
On a more personal note, I’m happy to report that I don’t think there were any noteworthy bad developments in my life. Other than getting another year older, which isn’t any fun.

I can,however, report a couple of good developments for the year, including the Princess of the Levant and some better performance on the softball field.
And in the I’m-not-sure-how-to-react category, my favorite daughter got engaged this year. I’m worried this may eventually lead to marriage. And then children.

Which would make me a grandfather, and I’d like to think that I’m much too young for anyone to call me Grandpa!
Posted by Diane Sori at 7:43 AM