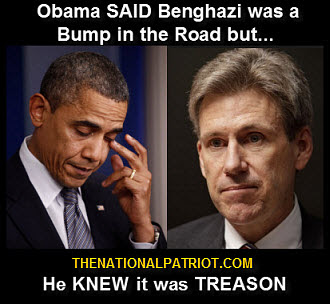 For the next two days, My Right Side Patriot’s radio partner, Diane Sori and I have combined our efforts to bring you the latest and most stunning coverage of the Benghazi cover up you will read anywhere.

If you think you already know the whole story…You don’t and, what you DON’T know is likely to light your hair on fire.

On January 15th, 2014, the Senate Select Committee on intelligence review of the Terrorist Attacks on U.S. Facilities in Benghazi was released to the public.

Naturally, you read that report.

Well, surely you heard all the details of it on the news.

You heard that the Benghazi attacks could have been prevented. That’s what you heard on the news.

In fact, that’s about ALL you heard on the news because, mainstream media and, in this case, even Fox news didn’t give the report the coverage they should have.

There’s a lot more, a WHOLE lot more in that report than, “It could have been prevented.”

Were you aware that the Senate Select Committee on Intelligence spoke with General Petraeus not once, not twice but, 3 times and one of those times was when the General was still the head of the CIA?

That is a fact that will become more important when you see how it ties in with the rest of this series later on.

The committee also spoke with the CIA Chief of Base Benghazi who was there on the night of the attacks, a fact made even more important given last week’s testimony from Michael Morrell, the then Deputy Director of the CIA who admitted that the unnamed Chief of Base Benghazi emailed him, just 4 days after the attacks to tell Morrell, in no uncertain terms that the attacks were NOT part of some protest over a You Tube video but were, in fact, a TERRORIST attack.