Op-ed:
Decisions Based on Politics Alone
By: Diane Sori 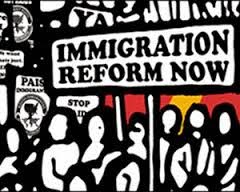 “This problem with unaccompanied children that we saw a couple weeks ago, where you had, from Central America, a surge of kids who were showing up at the border, got a lot of attention.”
- Barack HUSSEIN Obama speaking to NBC’s Chuck Todd

This past Friday, Saudi's King Abdullah gave a news conference to lay out his plans for a 560 mile fence along his country's northern border...a fence to help secure the kingdom's desert frontiers from what he called "infiltrators and smugglers."

A day later, Barack HUSSEIN Obama went on television to read off his teleprompter for the God-only-knows how many hundredth time to basically say... without actually saying the words...that he indeed was going to violate the law of our Constitution yet again with another one of his infamous executive orders, but that he would do so only AFTER the November election when it would have NO consequences for him politically. 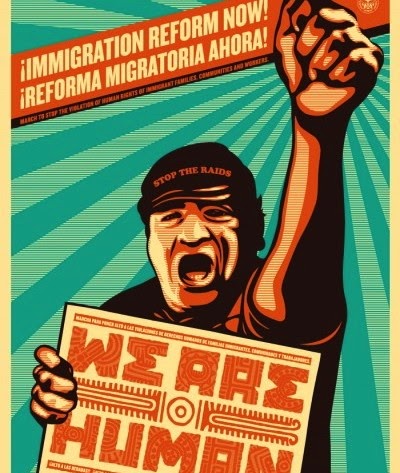 Now cow-towing to pressure from those within his own party and fearing that his giving blanket amnesty at this point in time to those 11 million+ ILLEGALS already here...to those ILLEGALS who in reality are criminals by their breaking our laws to get here...would negatively influence the election and cost Democrats control of the Senate. So what did Obama's handlers ...his puppet-masters...have him do...they had him pulling a political maneuver of sorts..."an ill-informed strategic decision that smacks of raw politics"...to both cover his tracks and hopefully save his party on election day. And they hope the media won't go against him for this was a total flip-flop from when in June he promised that he would initiate 'unilateral measures' ...translation: issue another executive order...by the end of summer if Congress did NOT enact immigration reform legislation that met with his satisfaction.

Blackmail if you will...blackmail plain and simple.

But now as all the polls show his approval numbers tanking and as once blue states start to show a decided turn to the right, Obama is whining that partisan politics is the reason for the current delay in immigration reform. Once again blaming Republicans...blaming everyone but himself for his failures...Obama issued a statement through one of his 'YES men' that said, "...because of the Republicans' extreme politicization of this issue, the president believes it would be harmful to the policy itself and to the long-term prospects for comprehensive immigration reform to announce administrative action before the elections."

But Obama is fooling NO one if he thinks any of us believe those nonsensical words.

“When I take executive action, I want to make sure that it’s sustainable,” Obama himself said...Obama himself lied...for NO matter the outcome in November we all know that when the election is over and all the votes are tallied that he will sign whatever he damn well pleases...and this time it will be an executive order granting amnesty to many if NOT all existing ILLEGALS...to the “the millions of people who are here, in many cases, for a decade or more”...as well as to allow many new "foreign professionals" as he calls them...to stay in this country...to stay here to continue to take what scarce jobs there are away from LEGAL Americans...to stay and continue to rape our welfare, health care, and educational systems...to stay and become Democratic voters for generations to come.

And while Obama is a fool...and a dangerous fool at that...he is in NO way stupid for he knows that while a Republican take-back of the Senate would seriously undermine what remains of his second term...basically rendering him politically impotent if you will...he also knows that he holds the trump card as Congress cannot totally take away or negate his dreaded 'pen' and 'phone.'

But what exactly...what truth...threw this newest wrench in Obama unilaterally implementing immigration reform now...it's really quite simple...it's the Democrats up for re-election who are shaking in their boots that they will NOT be re-elected because of his policy of looking away to what's happening at our southern border. That's it in a nutshell as these Democrats are hearing from their very angry and very frustrated constituents that Obama is doing NOTHING of substance about the surge of over 60,000+ children who have, over the past few months, crossed this still unsecured border and who are being 'distributed' to states all across our country...states who can ill-afford to be their wards in every sense of the word. And they are seething that it has become public knowledge that last year alone ICE released into an unsuspected public 36,000+ ILLEGALS...including 193 ILLEGALS convicted of homicide along with others convicted of lesser crimes...ILLEGALS who were awaiting the outcome of deportation proceedings but who now are wandering unfettered throughout our beloved country. 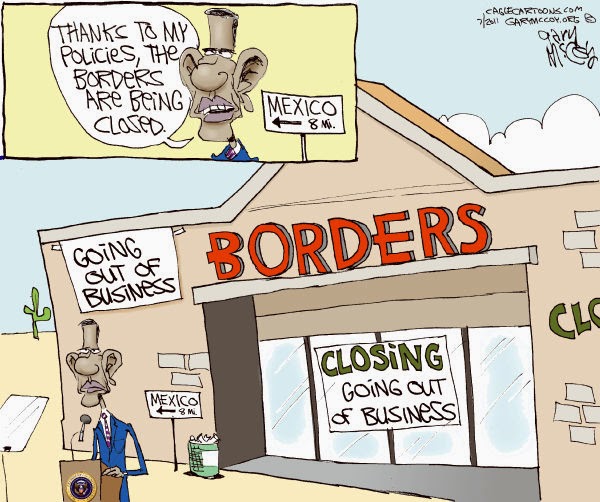 And know that NOT only has Obama made his own party unhappy because of his actions or should I say inactions, now he has also made current Hispanic voters unhappy because he had promised them immigration reform this summer and they will remember that broken promise at the polls. And he has made the leftist ILLEGAL advocates angry as well for now this delay is bringing to a crashing halt their drive to get the ILLEGALS legal status in time for November...to get them the vote so they can help keep the Democrats in power with the hope that our country will turn 'brown' in time for the 2016 presidential election...sorry but the truth must be told NO matter how politically incorrect it might be.

And while Obama continues to LIE in order to try to keep the Senate 'blue'...with his bloviations that “When I take executive action, I want to make sure that it’s sustainable...I want to spend some time, even as we’re getting all our ducks in a row for the executive action…to make sure that the public understands why we’re doing this, why it’s the right thing for the American people, why it’s the right thing for the American economy,” the truth is that while the number of children arriving alone might be somewhat dropping, what Obama is NOT saying...and what the Democrats up for re-election dare NOT even think about let alone say...is that 65,000 people arrived in 'family units' this year...more than the unaccompanied children...and that number is five times higher than the 'family unit' influx during the year up to October 2013. 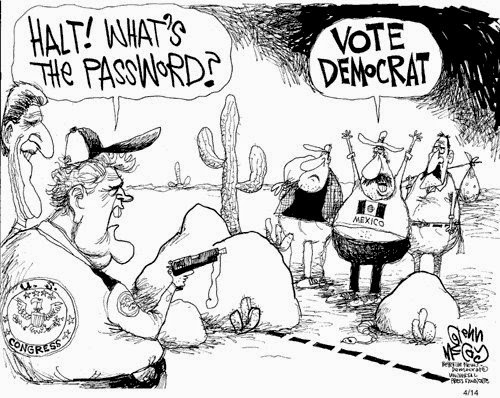 And with the cooler fall months soon upon us the number of ILLEGALS coming from Central America will indeed rise...and with his 'pen' and his 'phone' being put into use NO matter the outcome in November, Barack HUSSEIN Obama will have the votes in place for 2016...for in his eyes he does NOT really care that while he might lose the battle this November he will win the war for his party come 2016 with all these new voters...and that might just have been his plan all along.

Calculatingly deceptive little traitor isn't he...and it's 'We the People' who will continue to get screwed even when he's NO longer in office...for the now Obama created legal ILLEGALS will be his parting gift to us all...a gift that should have been returned to their country of origin long ago.
Posted by Diane Sori at 12:00 AM