'Workplace Violence' It Is Not
By: Diane Sori

”Militant Islam is on the march around the globe and must be stopped before it’s too late."
- Benjamin Netanyahu's words before the UN General Assembly on Monday

As the media tries to divert us with a laughable doom and gloom scenario about the recent White House breach and how serious it 'could' have been...serious my eye as Obama and family were NOT even there...they are trying to bury the ramifications of a story that does indeed matter...a story about militant islam now on our shores and Netanyahu's wise words might now, sadly, be too late to heed.

Evoking the usual cries of allahu akbar and other such nonsense as he repeatedly stabbed and then beheaded this woman, this act reeks of terrorism...of jihad...jihad now coming to life in America's heartland. But what does both the FBI and Oklahoma police deem this horrific act to be...random 'workplace violence' and NOTHING more...as if beheadings are the hallmark of disgruntled employees...as if beheadings are just a 'routine' happening here in America.

But this ruling is what we expected would happen. And those who made this so-wrong call don't even realize...or maybe they do...that they are now helping to advance radical islam here in our country. 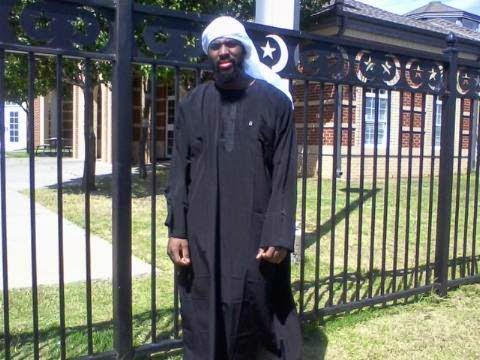 With their previous failing to call Fort Hood murderer Nidal Hassan's act of terrorism what it truly was, the FBI and local police have now failed yet again for they chose instead the cowards way out...perhaps because Nolen is black...perhaps because of flashbacks of Treyvon Martin and Ferguson's aftermath still remaining fresh in the public's eye...just saying.

And so as islam continues its encroachment upon our homeland, 'workplace violence' it is.

'Workplace violence' even though senior ISIS spokesman Abu Muhamad ad-Adnani called Fort Hood and now this “lone wolf attacks done inside the U.S.,” Nolen will be charged with basically what amounts to the 'crime' of first-degree murder and assault and battery with a deadly weapon. But now some are saying that down the road federal charges might be added...federal hate crime charges...but still NOT charges of terrorism. 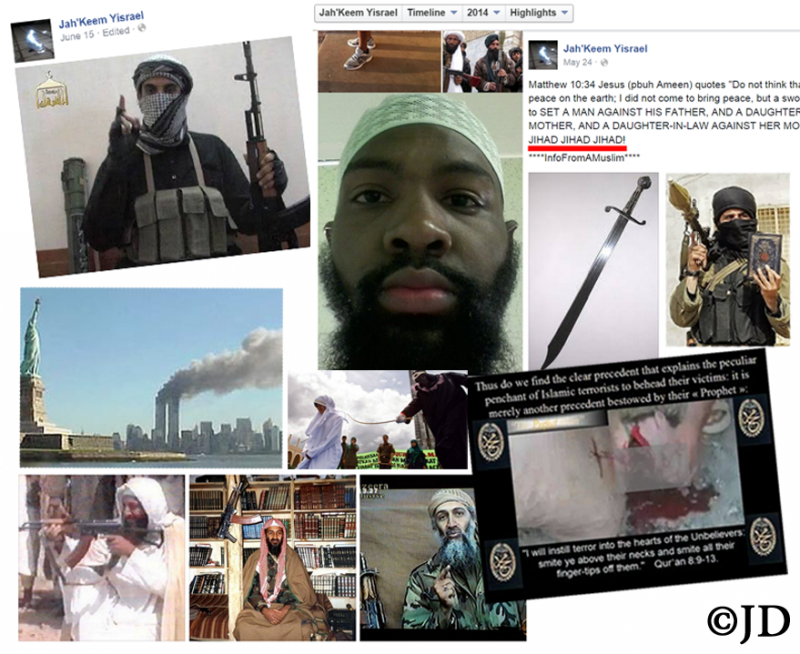 Got to protect the brethren you know.

But there is NO way that this act of beheading was 'workplace violence' as this was an unmistakable act of terrorism having all the hallmarks that prove it so. Hallmarks beyond Nolen's shouting islamic phrases as he went on his rampage knife in hand...hallmarks which include Nolen being introduced to islam while in prison... hallmarks including Nolen's facebook page in the months leading up to his horrific act showing post after post of beheadings and praise for the likes of Osama bin-Laden and his ilk...hallmarks including post after post of quotations from the qur’an intended to incite terror into both believers and nonbelievers alike, along with warnings to fellow muslims to be more "rigorous" and "correct" in their observance of islamic ritual and (what passes for islamic) morality. 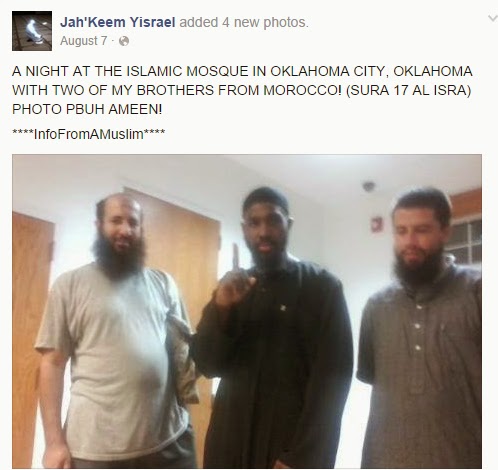 And also on Nolen's facebook page are two photos in specific...photos that show his direct ties to islam. One photo of him is with two members of the Islamic Society of Greater Oklahoma City where he is holding up his index finger in the hand sign used by members and supporters of ISIS...and the other is a photo of the 9/11 attacks with his comment, "A future prophecy revelation  18.8. She (the Statue of Liberty) is going into flames. She and anybody who's with her."

And yet this horrific act is still being deemed 'workplace violence'...shameful is all I can say.

And why is it being ruled this way...why are law enforcement authorities reluctant to challenge Obama who keeps claiming, "The U.S. is NOT now or ever will it be at war with Islam"...who keeps claiming, "Islam is a religion of peace." Why was this particular act that was both inspired and approved by islam deemed 'workplace violence'...why. I believe it's out of fear of stepping on muslim toes is why...out of fear of accepting as fact that those out to kill us all are now walking freely amongst us...out of fear of contradicting this administration's call for 'political correctness' when dealing with anything muslim and NOTHING more. And 'they'...the jihadists... are indeed walking freely amongst us because we have a president who has let the muslim infiltration of America move forward while he closes his eyes and gives praise to allah that our enemy...that those who are his brethren...can do what they do while his hands remain physically clean of the blood that is really upon them... the blood that NO matter how hard he tries he can NEVER really wash off. 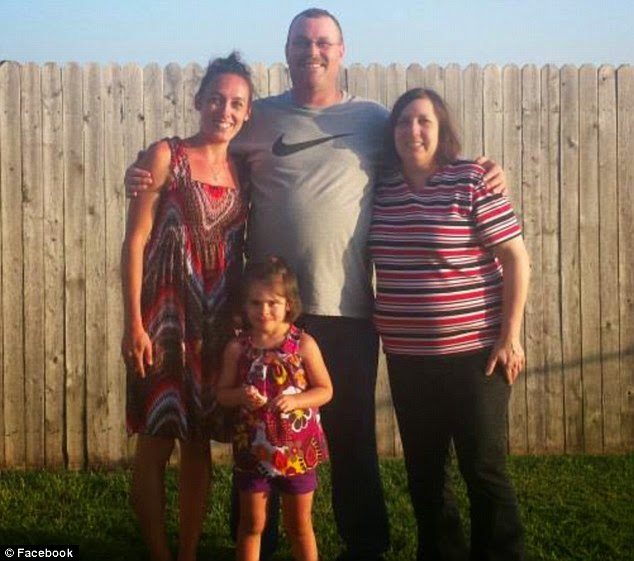 Now of course the left is saying that this call of 'workplace violence'...NO matter that Nolen was fired for tying to convert co-workers to islam and was a proponent of stoning women...was indeed the right call because Nolen was NOT the first person nor will he be the last person to be angry over being fired and react violently. Many are even saying that Nolen had to be mentally ill to do what he did but that is just an excuse to cover the fact that while Nolen was stabbing Colleen...when Nolen was beheading her...he was following what he was commanded to do by the words of the qur'an...commanded in Sura 47:4 to do..." When you meet the unbelievers, strike the necks…”

And do it he did.

Driven by revenge NOT for just being fired but seeking revenge for the rejection of islam by those he tried to convert, Nolen lashed out...good muslim that he is...by following the tenets of islam laid down in the qur'an equating to jihad and NOTHING less. And America is scared as this act was done on American soil...was done in America's heartland...and has now forced us to constantly look over our shoulders ...to become aware of our surroundings and of just who might now enter those surroundings. 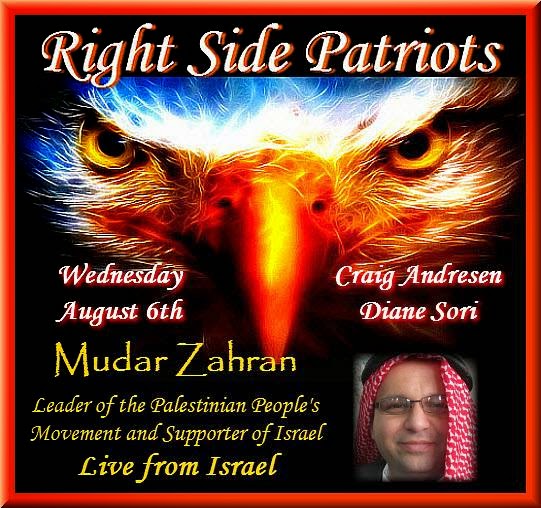 Today, Wednesday, October 1st from 2 to 4pm EST join Craig and Diane on RIGHT SIDE PATRIOTS on CPR Worldwide Media with their special guest MUDAR ZAHRAN, the Pro-Israel leader of the Palestinian People’s Movement with his take on what’s been taking place in the Middle East and how Obama’s strikes in Syria are affecting ISIS and Israel. Craig and Diane will also be covering ALL the late breaking news including an update on the Oklahoma beheading.