CBO: By the Way, Obamacare Will Cost Taxpayers $2 Trillion Over the Next Decade

Congratulations on your new healthcare system, America. It's actively hurting far more people than it's helping, it's whiffing on virtually every central promise made in its promotion, it's been widely unpopular from the moment it was proposed, and this parade of failure will cost you a cool $2 trillion over the next ten years. We've exposed Congressional Democrats' bogus 2010 accounting gimmicks many times before, and the tab just keeps growing (via Phil Klein):

President Obama's healthcare law will spend about $2 trillion over the next decade on expanding insurance coverage but still leave 31 million Americans uninsured, according to an analysis from the Congressional Budget Office released on Monday.

When Obama pitched the healthcare law to Congress, he said it would cost "around $900 billion" over 10 years. But his statement was misleading because the way the law was designed, the major spending provisions didn't kick in until 2014. This meant that 10-year estimates at the time the law was passed in 2010 were artificially low, because they included four years (2010 through 2013) in which spending was negligible. The new CBO analysis finds that between fiscal years 2016 and 2025, spending on the law's expansion of Medicaid will cost $920 billion and insurance exchange subsidies will cost nearly $1.1 trillion. The major spending provisions, taken together, will total $1.993 trillion....By 2025, the end of the projection period, the CBO projects that Obamacare will increase insurance coverage by a net of 27 million, while 31 million will remain uninsured.

Klein notes that the full impact of the law's various delays, waivers and Kafkaesque pay-fors aren't reflected in the latest CBO numbers because Congress' nonpartisan bookkeepers have given up on trying to provide full fiscal impact analyses about Obamacare.  Conn wrote up CBO's budget projections earlier in the week; they belie President Obama's tendentious crowing about deficit reduction in his State of the Union Address. He always elides the inconvenient part about the unprecedented explosion of red ink in his first term: 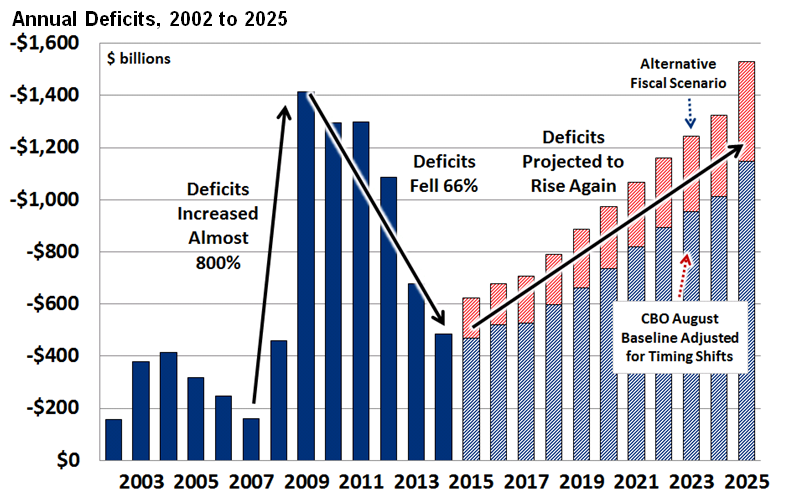 The "low" FY 2015 deficit is still hundreds of billions of dollars higher than the Bush average, and our annual shortfalls are expected to soar again in the coming years, once again topping $1 trillion by decade's end.  A House Budget Committee review of the numbers concludes, "these deficits will add another $9.5 trillion to the national debt by the end of the decade – bringing the total to over $27 trillion."  The United States has accrued roughly $8 trillion in national debt since President Obama took office, making him far and away America's undisputed historical 'Debt King.'  By Obama's own standard, his fiscal tenure has been exceptionally "unpatriotic." I'll leave you with embattled CBO director Doug Elmendorf describing the country's fiscal footing as unsustainable at a hearing this week:
http://townhall.com/tipsheet/guybenson/2015/01/28/obamacare-cost-n1948878?utm_source=thdailypm&utm_medium=email&utm_campaign=nl_pm&newsletterad=thpm1

This reality has been clear for some time, but the White House is explicitly uninterested in solving the problem. The president and his party would prefer to cynically demonize others' solutions for short-term political gain -- because, you see, Obama is so committed to engendering "a better politics." The federal government has a spending problem, and in spite of all of the DC chatter about "the rich," middle class earners should be worried about leviathan's rapacious appetite.
See video here:
http://townhall.com/tipsheet/guybenson/2015/01/28/obamacare-cost-n1948878?utm_source=thdailypm&utm_medium=email&utm_campaign=nl_pm&newsletterad=thpm1
Posted by Diane Sori at 3:40 PM