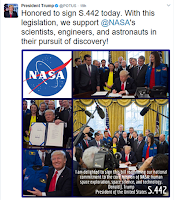 “With this legislation, we support NASA’s scientists, engineers, astronauts and their pursuit of discovery,” said President Trump during a signing ceremony at the White House. “America’s space program has been a blessing to our people and to the entire world. Almost half a century ago, our brave astronauts first planted the American flag on the moon. That was a big moment in our history.  Now this nation is ready to be the first in space once again. Today we’re taking the initial steps toward a bold and brave new future for American space flight.”

The Act, passed unanimously by Congress, authorizes the development and execution of a long-range plan for deep space human exploration; invests in robust science, technology and aeronautics portfolios; and endorses the Agency’s successful efforts to nurture a new commercial market that will boost our economy and create more jobs. Additionally, it guarantees vastly improved health care for the heroes who risk their lives in the exploration of space.

Attendees of the White House signing ceremony with the President included:
Acting Administrator Lightfoot added, “NASA would like to thank President Trump for his unwavering support of the Agency and express our gratitude to a bipartisan Congress for its thoughtful consideration of NASA’s future. We are grateful for the longstanding support and trust of the American people. NASA stands ready to meet the challenge of pioneering new frontiers in space.”

The Authorization Act signed today and the President’s proposed $19.1 billion budget announced last week provide a powerful framework for NASA and a roadmap for this Nation’s future in space.

These steps reaffirm that NASA should remain a multi-mission agency with a balanced set of core missions in science, space technology, aeronautics, human space flight and exploration, and work to inspire the next generation of explorers.
Posted by Diane Sori at 11:43 AM