Op-ed:
The countdown to war has begun
By: Diane Sori 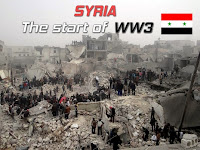 With yesterday’s 10 to 7 vote by the Senate Foreign Relations Committee, Barack HUSSEIN Obama is now one step closer to involving the United States in a sovereign country’s civil war.

And thanks to RINO extraordinaire and now ‘fallen from grace’ war hero Senator John McCain adding a last minute amendment to the resolution that said the aim of the US taking military action against al-Assad was to change the momentum in the war in favor of the rebels…thus the actual goal of regime change could NOT be spelled out any more clearly.

And with Obama using the argument that stopping the use of chemical weapons is in the national interest of this country, and while still ignoring the fact that both Great Britain and The Arab League will NOT support his true intentions of trying to initiate said regime change in Syria…make NO mistake about it…regime change is Obama’s ultimate goal…regime change where his brethren in the Muslim Brotherhood become the titular head of the once mostly secular Syria, and John McCain just helped him do it.

NOT only is Obama bucking the wishes of ‘We the People’ who are tired of sending our brave young men and women in uniform (men and women who come home broken, missing limbs, or worse) into muslim countries that don’t want us there to begin with…muslim countries that stab us in the back every chance they get…even international law says what Obama is preparing to do does NOT meet international guidelines…guidelines which condone the use of pre-emptive force only as a means of self-defense. In fact, the UN charter states nations may defend themselves only once they are attacked…and in NO way has Syria now or ever attacked the United States...so what is Obama defending us from …NOTHING … absolutely NOTHING at all.

And with Obama calculatingly planning to violate international law by 'selectively' targeting and bombing chemical weapons stashes in Damascus (which we all know have been moved to different locals by now because Obama loves giving away our military's plans), Obama has also declared the recent events that unfolded in Syria to be a ‘humanitarian crisis’, and basing that solely upon the photos of 426 ‘dead’ children. Photos of ‘dead’ children…most of which were either staged or were rerun from those taken in Iraq when Saddam gassed the Kurds…ignoring the 100,000+ deaths in the previous two and a half years of the conflict…deaths at the hand of both sides.

100,000 deaths vs. a ‘supposed’ but unconfirmed 426 deaths…you tell me which is the true ‘humanitarian crisis’.

Yet NEVER a word from Obama was said about those deaths…but pulling on the heartstrings of many with photos of ‘supposedly’ al-Assad caused ‘dead’ children was said in a voice loud and clear for all to hear. Only a weasel like Obama would use children … whether dead or alive…to push his personal agenda…his personal agenda once again being regime change.

And at the center of all Obama’s subterfuge and political jockeying…being played for maximum impact…is the ‘supposed’ use of sarin gas that’s been the kindling igniting his sudden desire to send our country to war yet again.

Remember, after World War I the Geneva Conventions outlawed the use of chemical weapons during warfare, saying that irrefutable evidence that a chemical attack occurred must be presented along with a convincing argument that there is NO peaceful means to stop their use in order for the UN Security Council to authorize force against a sovereign nation. And NO definitive irrefutable proof has yet to be presented that al-Assad gassed his own people. In fact, many have claimed that it was the al-Qaeda backed rebels…the Free Syrian Army…that did the gassing.  Yet Obama has taken it upon himself to be al-Assad's judge and jury, and to declare him the one who gassed the children.  And to punish him Obama has decided that military action must be undertaken, and that it's in America’s national interest to do so.

Please pray tell how it’s in our country’s national interest to punish someone thousands of miles and continents away. 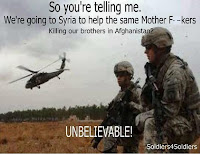 And while the War Powers Clause does allow Obama the right to deploy troops when there’s a ‘national emergency’ caused by an attack on this country or on our possessions, if Syria attacked us I must have been asleep, because I missed it.

So as Obama publicly claims that a US attack on Syria is NOT about his credibility or about the ‘red line’ comment he made last year, what is important for everyone to remember is that a military strike by the US against al-Assad will serve only one purpose…that is to strengthen the hand of those trying to turn Syria into an islamic state. And also remember that if al-Assad loses this war, Syria will become the first country ruled by either al-Qaeda or another jihadist group. And if that happens, neighboring Jordan will almost certainly fall to the same jihadists or to the Muslim Brotherhood itself.

And if Jordan falls the surrounding of Israel will be complete…and if Israel is attacked in any way World War III will be at hand.

And maybe just maybe that has been Barack HUSSEIN Obama’s plan all along.
Posted by Diane Sori at 12:01 AM