Op-ed:
Hey Obama...when even the Afghans are angry you know you're in trouble
By: Diane Sori

The Bowe Bergdahl saga continues on as now even the Afghans are furious about Barack HUSSEIN Obama’s trade of five Taliban terrorists for one American traitor.

And why shouldn't they be as these terrorists will now put a bulls eye on any and all Afghans who they even suspect of aiding the Americans, treating them as if they were Americans themselves. Gives new meaning to Obama's infamous line about standing with the muslims if political winds shift in an ugly direction...now doesn't it.

In fact, these five...the five highest-ranking members of the Afghan Taliban...were classified as being “high-risk” and “likely to pose a threat” by the Pentagon, so Afghan President Hamid Karzai being beyond angry at his being kept in the dark about this trade, more than justifies his public declaration accusing Obama of NOT only failing to back a peace plan for his country but of actually throwing a wrench into it. And now he's even more distrustful of U.S. intentions than he was before, and rightly so, for Karzai knows firsthand what the Taliban are capable of, and he is more than a bit fearful of their return to the battlefield to feed into and egg-on the insurgency just as we are preparing to leave the country...and they know the date for that as our traitor-in-chief announced said date for the enemy to hear and to prepare for.

And in a statement he issued, Karzai went so far as to say that this trade violated international law and had possible regional repercussions... especially for Pakistan and India. And he also criticized the deal as a violation of international law. “No government can transfer citizens of a country to a third country as prisoners” Karzai said, and he's right as five of its citizens have now been handed over to a third country as prisoners.

But more important than either international law violations or regional fallout is the fact that this trade also violated our U.S. laws in the very nature of its handover of said Taliban to a third country ...specially to a country we have NO transfer agreements with.

According to our own Justice Department, NO prisoner should be traded if said prisoner "has criminal ties to the receiving country, as transferring him could well be more likely to facilitate reintegration into his criminal milieu than to facilitate rehabilitation into civil society." And of course these five have criminal ties in Qatar as the main Taliban office is located in Qatar...an office that is directly connected to the Taliban military command back in Afghanistan.

Also, according to our Justice Department's 'Guidelines for the Evaluation of Transfer Applications of Federal Prisoners,' the United States can only transfer a prisoner to a country with which it...the U.S...has a prisoner transfer treaty agreement and of which the prisoner is a citizen. Now remember, the terrorists were NOT freed per se, but were 'transferred' to the custody of the Qataris but they are NOT citizens of Qatar...they are Afghan citizens being transferred to a third country...that being Qatar...so right there the transfer was ILLEGALLY done and done by knowingly breaking our laws by Barack HUSSEIN Obama.

And this next little bit of information is a biggie folks as the U.S. does NOT...I repeat NOT...have a prisoner exchange agreement, a bilateral transfer agreement, or any such transfer agreement NOT only NOT with Qatar, in fact, we have NO such agreements in place with Afghanistan or Pakistan either...all countries involved to one degree or another with Berghdal and his captivity. And you can see the list of those countries we do have transfer agreements with right on the Justice Department web site itself by clicking on this link: http://www.justice.gov/criminal/oeo/iptu/lists.htm...

So here we have proof positive that Barack HUSSEIN Obama knowingly, willfully, and with malice ...as he knew what this transfer ultimately means for the Afghans... broke the laws of the United States of America...and this sitting Congress still does NOTHING but talk the talk instead of walking the walk.

And besides this being a form of 'aiding and abetting the enemy' during a time of war...a treasonable offense in and of itself...this prisoner exchange is a move done by this president...besides to appease his islamic brethren...for NOTHING but political expediency as it disengages us from the Afghan war theater by a date sure to influence votes in the November mid-term elections, especially the votes of those Americans tired of this long drawn out war...a war gone on too long simply because America's 'supposed' Commander-in-Chief has our soldiers NOT being allowed to fight to win, but who are being forced to fight solely to 'win the hearts and minds' of the enemy...something this White House knew from the start would never happen. 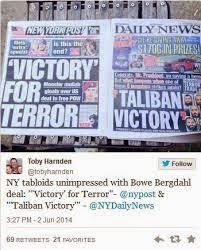 Also Obama violates...while NOT law per se...the U.S. policy of NOT negotiating with terrorists as the deal reached...a deal hailed as a victory by Afghan Taliban leader Mullah Mohammad Omar...gives added incentive for the Taliban to take U.S. soldiers, diplomats, and citizens hostage, and to use them as a bargaining tool for any and all manner of demands made by both the enemy and rogue terrorist groups.

And Obama will surely bow down to his brethren and acquiesce again to any and all demands they make.

And with Bergdahl NOT being a hostage...as hostages usually have as demands for their release cash and lots of it...but with his being a deserter at best and a traitor at worst...and as the five Taliban claim they are NOT terrorists but enemy combatants captured in war...Obama just keeps on saying over and over that this was NOT a 'terrorists-for-hostages' exchange but an exchange of prisoners of war. But with neither Bergdahl nor the 5 Taliban being POWs, we all know Obama's words are pure unadulterated...to put it mildly...crap. Remember, according to those who were there, Bowe Bergdahl willingly walked into away and into the hands of the Taliban...therefore he was NO POW...and the Taliban were NOT enemy combatants but were and still are terrorist operatives of the highest degree.

So on all accounts Obama most assuredly violated quite a few of our laws (see yesterday's op-ed about sedition) NOT the least of which is the fact that he circumnavigated a law which is part of NDAA that requires the White House to notify Congress 30 days in advance of any transfer of GITMO prisoners. Saying that he needed to seize the opportunity to go in and get Bergdahl now because of his concerns about Bergdahl’s health deteriorating if the transfer was delayed...Obama once again bold-faced LIED to the American people as in NO way do the pictures and videos of Bowe Bergdahl that have been released show a man in ill-heath.

So now the ball is in the hands of Congress to do what has long been overdue... impeach and then arrest, try, and convict Barack HUSSEIN Obama on the grounds of treason in that this release of the 5 Taliban directly 'aids and abets' the enemy...and then have the sentence for that conviction carried out...period.
Posted by Diane Sori at 12:00 AM