Op-ed:
Its Happened Again but This Time the Race-Baiters Remain Silent
By: Diane Sori

When will some people learn the simple fact that if you go up against the police chances are it will be you who is at the receiving end of a bullet and NOT the police.

Case in point...coming just 10 days after Ismaaiyl Brinsley assassinated N.Y.P.D. Officers Rafael Ramos and Wenjian Liu in retaliation for the police (justifiable) killings of Michael Brown and Eric Garner, this past Tuesday 52-year-old Joseph Anthony Pacini was shot and killed by police in Drexel Hills, Pennsylvania, after police tried to serve him with a warrant for his Facebook threats, via YouTube videos, where he threatened to kill police and FBI agents.

In some of the videos, the previously twice-arrested Pacini claims he was falsely accused of crimes he didn't commit, begs for singer-songwriter Sara Bareilles to save him, and threatens to kill law enforcement officers who were always following him...following him in his own mind that is. And in his very last video, posted at 4pm the very afternoon he was shot and killed, he spews a rambling tirade that became a harbinger of what lay ahead as he said, “This is my coming out party. So if you want to try and bring me down I will [expletive] kill you and your whole [expletive] family all right? So go ahead and [expletive] with me.”

Well he did get to go to his coming out party but NOT in the way he intended.

Briefly, after going to his home in Clifton Heights to serve a warrant and seeing him leaving, Clifton Police followed Pacini into Upper Darby then tried to make a felony traffic stop and take him into custody. Unsuccessful, they were forced to call the Haverford Police and Upper Darby Police for help and together they were able to box Pacini into the driveway of a bank. Telling Pacini he was under arrest they then tried to approach the car Pacini was in, but instead of leaving his car with his hands up as instructed, Pacini chose to put his car into reverse and slam into the official vehicle of the Clifton Heights police chief. Pacini then attempted to run over the officers who were standing around the vehicle leading five officers to open fire on his car, hitting Pacini several times, rightfully killing him thus saving the taxpayers the cost of a trial and a lengthy prison stay.

And true to form and right on cue the kumbaya sorts struck up their band to bloviate that the police had killed an unarmed, and in their eyes, mentally-ill man. Blind to or simply ignoring the fact that Pacini's 2005 arrest was for recklessly endangering another person, false imprisonment, and making terrorist threats directed towards Philadelphia...his threats now became his sad reality when this man willfully decided to use his vehicle as a weapon.

And so the war on police continues on...continues on with the encouragement of the likes of Al Sharpton whose vile words, "What do we want..We want dead cops," and "NO Justice NO Peace," along with Obama having told the Ferguson anything but peaceful protesters to "stay the course" have set off the latest round of pure hatred by blacks against all those who wear the badge. But there is a difference with this particular shooting as this time the perpetrator was white as were the officers involved, and because of that one fact the race-baiters and white-haters...in specific the trio of Obama, Sharpton, and Holder...have remained oh so silent for to them who cares if a white man is shot dead and who cares if white officers are killed for to them all that matters is black folk.

Remember, since Obama first became president back in January 2009 there has been increasing anti-government sentiments (rightfully) spreading throughout this country because of the words and actions of both he and his administration. And that coupled with the race-baiting, white-hating trios false and overblown claims of a troubled relationship between local law enforcement and the black community has been the direct cause of once healing race relations being ripped open again, and in turn filtering down to its creating of a very dangerous situation for law enforcement all across the country. So dangerous in fact that the number of local law enforcement officers killed by firearms this year alone* rose by 56% and that number included 15 ambush deaths, with 50 officers being killed by firearms as opposed to last year's total of 32 such deaths.

Now add in these numbers...126 federal, local, tribal, and territorial officers were killed in the line of duty in 2014. That's a 24% rise from the 2013 total of 102 on-duty deaths. And...this should come as NO surprise...most of those officers killed in both local and national totals were killed by black perpetrators...something the media always seems to fail to mention.

But to be fair, it must be noted that whites have also murdered police officers. However, as opposed to the recent series of cop-killings spurred on by Al Sharpton and his ilk, the race of the officers played NO part in those killings. For example, the fatal shooting of two Las Vegas police officers ambushed last June by Jerad and Amanda Miller while they were eating lunch, and a Pennsylvania state trooper killed in an ambush in September as he walked towards his patrol car by survivalist Eric Frein (who then led police on a 48-day manhunt), were based on the generalized anti-government sentiments of the killers NOT on a vendetta against the police for their (rightful) killings of black thugs.

And if you go further back to May 20, 2010, two West Memphis, Arkansas, police officers were killed by a father-son team using AK-47s during a routine traffic stop...both of whom had posted anti-government rants on YouTube. And in April, 2009, Richard Poplawski, also using an AK-47, killed three officers who responded to his deliberately placed call of a domestic disturbance at his home, because he was convinced that the Obama government via the local police were going to take away his and the rest of America's guns. Again, the difference...and it's a big one...between these murders and the recent round of non-black police murders is that these people had NO idea what color the officers would be who stopped them or responded to their call. Does this fact temper down the fact that officers were murdered...absolutely NOT...but it does remove the racial aspects completely. 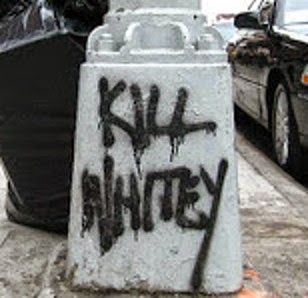 Race...for the Obama, Sharpton, and Holder trio (remember Holder seems always to take the death penalty off the table when blacks murder whites) and the thugs who idolize them... everything is about race...from their very existence to every move they make or thing they do they perceive is being done to them simply because of the color of the skin. Their words, actions, or deeds, matters NOT just that they are 'people of color' and NO more. That and anything a white man might say about their behaving badly.

For example, when white ex-NYC Mayor Rudy Giuliani stated his opinion that Obama was directly contributing to hate propaganda by encouraging black people to "hate the police," and then refused to back down or apologize for those words, black community leaders got bent out of shape with what has proven to be the truth...proven to be the truth by the very actions of black thugs behaving badly... with the key word being 'black.'

And the head black thug...the leader of the thug pack...is none other than the anything but Reverend Al Sharpton himself, and that can be explained quite simply by Giuliani's further words about the “anti-police” message being sent out to the black community. "When Sharpton, an outspoken agitator who has protested homicides of minorities by police since the 1990s, is in public with leaders such as Obama or New York City Mayor Bill de Blasio that stands for something. He is involved in every racial or quasi-racial issues that has involved any police officer…always on the side of whoever is against the police."

And how right Giuliani is because whether some choose to believe it or NOT actions do speak louder than words and Sharpton's direct relationship with both Obama and de Blasio...hell...he's both of their defacto but NOT admitted to race-relations (ill) adviser...helps to contribute to the overall anti-white, anti-police sentiments coming from this White House and to a slightly lesser degree from New York's Gracie Mansion. How so...because Obama and De Blasio both NEVER criticize nor counter any of Sharpton's words or actions...in fact, in the case of Obama, he continuously praises Sharpton's words and actions and feeds upon the Sharpton rhetoric of blaming whites for all that ails today's black community, especially its young black men.

And now as we await Sunday's funeral for assassinated Officer Wenjian Lu, the sad fact remains that this anti-white, anti-police sentiment is continuing to be spewed by the likes of Al Sharpton with his vile words, and by the likes of Barack HUSSEIN Obama with his silence in coming forth as president and calling for an end to thugs behaving badly...but then again how can he when he too is a thug albeit an educated one. And as the old saying goes, while you can physically take the boy... or in this case the man...out of the ghetto, sometimes you just can't take the ghetto out of the boy.

* Figures as per the annual report by the nonprofit National Law Enforcement Officers Memorial Fund
Posted by Diane Sori at 12:03 AM