Op-ed:
A Declaration of War That is Anything But
By: Diane Sori

“EVIL IS REAL! There is no light gray...murdering innocent people to move a political point of view has been, is and always will be evil.”
- former President George W. Bush's words about ISIS and the atrocities they're committing

"It is not the authorization of another ground war, like Afghanistan or Iraq."
- Barack HUSSEIN Obama's words mocking Bush taking America to war after 9/11

Let's start with some truth...Obama lost the peace that Bush had won in Iraq... equating to thousands of American lives lost and American blood shed having been for naught. And the Iraqi people who once held up proud 'purple fingers' are now drenched in blood and lots of it. And all because Barack HUSSEIN Obama does NOT want to win...period.

And isn't it sad that it took this man months after the horrific beheading of two Americans to ask Congress for an official Declaration of War...a Declaration of War with stipulations that is...stipulations because he dare NOT step too much on the brethren's toes. Simply put, Obama's resolution asks Congress to authorize his going to war against ISIS so long as the war does NOT include “enduring offensive ground combat operations;” so long as it does NOT go on for longer than three years; and extremely critical...so long as other authorizations already in place (especially those put in place by GWB) be repealed first.

Selectively choosing which authorizations he wants to keep and which he wants to do away with...such as the authorization that allowed Bush to invade Iraq in 2002... while keeping the ones he favors...like the one that allowed him to use drone strikes against suspected terrorists, like the one that allowed him to initiate airstrikes in Iraq and Syria, and like the one allowing him to send 3,000 military advisers back to Iraq...Obama has again proven himself to be both partisan driven and anything but a much needed commander-in-chief.

And with this particular resolution...actually a draft authorization for use of military force (AUMF)...America's traitor-in-chief has done it again...appeased and placated the enemy with stipulations that will allow them the time to actually grow stronger... appeased the Democrats with an oh-so carefully worded proposal so as to make war palatable to the kumbaya left while forcing the Republicans to either pass or NOT pass what they know is anything but a true Declaration of War...and allowing for the passing of the buck onto the next president so ISIS becomes their headache...and all while jeopardized our national security by his very act of inaction...inaction in his refusing to deploy American 'boots' to do what 'We the People' know needs to be done.

And in Obama's saying that American 'boots' will be sent to the ISIS theater of war only “If we had actionable intelligence about a gathering of ISIL leaders, and our partners didn’t have the capacity to get them, I would be prepared to order our special forces to take action, because I will not allow these terrorists to have a safe haven,” Obama is basically eliminating the U.S. from doing what only the U.S. can do...destroy ISIS in full. But then again why would he do that when the fact is that Barack HUSSEIN Obama still will NOT recognize let alone say that ISIS is indeed a terrorist group...a muslim islamist terrorist group...and why would he do that when he continues to refer to ISIS as ISIL...ISIL...the acronym for the Islamic State of Iraq and the Levant...ISIL...a word that salutes those wishing to wipe Israel off the map for the Levant's map is minus the Jewish State of Israel.

But Obama knows all this and simply put...he just does NOT give a damn that America be the victor in this 21st NOT 11th century war...a war he alluded to in his despicable Prayer Breakfast comments.

So after sending his resolution to Congress for discussion and then for hoped-for approval, this miserable excuse of a president said with a straight face that 'his' actions...it's all about 'him' after all...would “show our troops and the world that Americans are united in this mission.” Oh really...tell me how when the resolution presented puts a time frame on how long America will be “united in this mission”... as in three years...for he just told ISIS...just like he told al-Qaeda and the Taliban...how long they need to lay low before they can safely resurface even stronger and more vicious than before.

And the sum total of what Obama wants his mere three-page resolution to do in regards to the enemy adds up to zero for in NO way does it lay out a viable and workable strategy to defeat ISIS...it barely lays out a plan to contain ISIS. First, this Obama fiasco provides NO geographic limits on the battle, meaning what small amount of ground forces that will be fighting will be stretched to the breaking point in an attempt to cover all bases; second, it limits American ground troops by banning the afore mentioned “enduring offensive ground combat operations,” in other words it bans a much-needed army of occupation for an extended period of time and allows for Special Ops only if Obama gives the go-ahead (remember Benghazi and know that said go-ahead will NOT be given); and third, it expires after three years unless renewed by Congress meaning Obama has once again given the enemy America's time table for war.

And if approved...and I truly hope the Republican-controlled Congress will toss this nonsense in the garbage...it would be the first time Congress has 'officially and legally' authorized this president's use of military force in an actual declaration of war as all other military actions by Obama have been done unilaterally ignoring the War Powers clause of the document he so loves to trample...the U.S. Constitution.

So now as we await hearings on Obama's proposal, remember that the military campaign in both Iraq and Syria that began six months ago will continue whether Congress approves this resolution or not, and remember too that to defeat this enemy a detailed and fine-tuned military strategy is a must NOT a strategy that starts off limiting military options. So, what do some of America's military leaders and those in the political know think of Obama's plan...a plan that is NOTHING but a rehash of the to-date failed airstrikes and airstrikes alone.

First, House Homeland Security Committee Chair Michael McCaul (R-TX) says the the authorization Obama has proposed, “ties our hands and specifically ties the hands of the generals.” Adding that he would rather have NO AUMF than the one Obama is proposing because of Obama's insistence the NO ground troops will be sent unless there is a direct threat to our homeland, McCaul clearly recognizes the fact that without American 'boots' going on the offensive ISIS cannot be defeated.

And according to Rep. Louie Gohmert (R-TX) Obama “has never had a good strategy,” and he went so far as to say that he believes that if Obama had bombed al-Assad’s government forces in Syria as he proposed doing last year, then ISIS would have already taken over all of Syria. Translation: Obama does NOT have a clue what constitutes sound military judgment and that lack of judgment would continue on against ISIS itself as this most miserable excuse of a president has replaced our top military leaders and strategists with NOTHING but party 'yes-men' and islamic sympathizers.

As for the generals and military officials themselves...generals like four-star General Martin E. Dempsey and General Lloyd J. Austin, former Commanding General of U.S. Forces in Iraq, many believe Obama's proposal is weakened by its very words “enduring offensive ground combat operations.” Ambiguous in its meaning leaving the interpretation of its words to Obama alone...and we all know how dangerous that could be...it basically NOT only puts a definitive time frame on a specific operation but it also leaves the amount of 'boots' needed for said operation up to Obama and his political cronies alone instead of the generals on the ground who know best.

In fact, Defense Intelligence Agency’s Lt. Gen. Vincent Stewart, in speaking before the House Armed Services Committee, did NOT hold back his disdain for Obama's proposal. Saying he is tired of the lack of leadership coming from this White House, Stewart reiterated the fact that ISIS is growing rapidly, and that Obama’s either pathetic response or NO response is simply NOT getting the job done. “U.S. President Obama has no intention of being a leading part of that team,” Stewart said in reference to the coalition Obama claims he's leading. Adding, “When will he (Obama) learn that diplomacy doesn’t work with savages!”...note that Stewart said 'savages' something Obama will NOT say about his brethren. (article continues below video.)

So now we wait to see what the Republican-held Congress will do as hearings are held...discussions behind the scenes take place...backdoor deals are made...and all sorts of placating to the enemy becomes a sad reality. But what we cannot afford is for politicians to decide what 'truth' will be disseminated and what 'truth' will be kept from the public's consumption for the simple fact is that today's world is in the sad shape it's in due to Barack HUSSEIN Obama's weak stance on escalating terrorism coupled with his pushing his own personal agenda...his own personal islamist agenda that is. 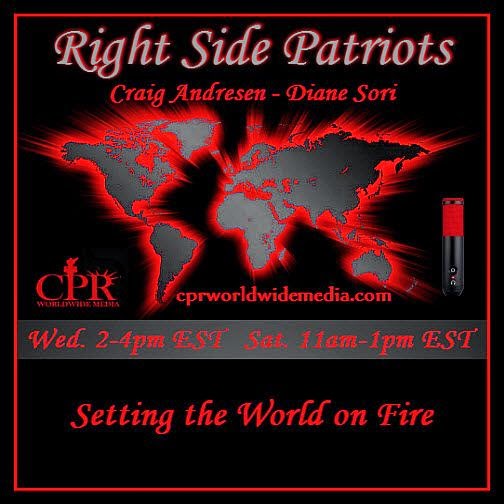 Today, Saturday, February 14th, on RIGHT SIDE PATRIOTS on CPR Worldwide Media from 11am to 1pm EST, Craig and Diane will discuss the deteriorating situation in Yemen along with its ramifications, and will tackle the issue of racism and hate crimes in today's America.