Op-ed:
Acts of Pure Evil vs. NO Strategy at All
By: Diane Sori 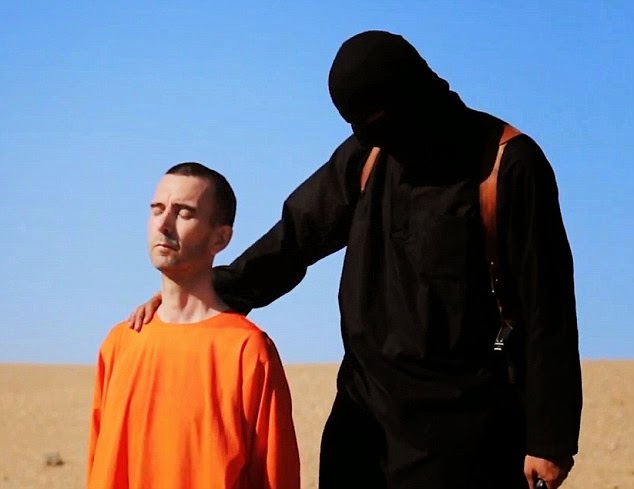 And now a third westerner has been beheaded by ISIS...this time British humanitarian aid worker David Haines...another death that can be laid at the feet of the man who for all intents and purposes has done NOTHING of substance beyond spewing 'political promises'...promises made to try and save his miserable legacy. Placating words of a 'NO strategy' strategy cobbled out to try and stop numbers in free-fall...numbers that show that Americans have NO confidence in him or his policies...numbers that show the rest of the world is laughing at him...is laughing at our beloved America... as they now see Vladimir Putin as the world's top dog. 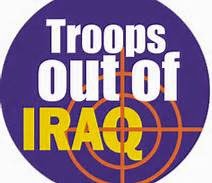 And the bottom line is if this most traitorous of presidents had NOT announced for the world and our enemies to hear our date of withdrawal...if he had heeded George W. Bush's 2007 warning that pulling U.S. troops out of Iraq too soon... pulling them out against the advice of our commanders on the ground...would have devastating consequences...consequences including that said withdrawal would allow terrorists to establish a 'safe haven' in Iraq to replace the one they lost in Afghanistan...ISIS would NOT be the threat it is today for ISIS' emergence as a prime player on the world stage corresponds directly with Obama's pullout of our troops from Iraq.

And now to add insult to the injury of his 'NO strategy' strategy, Obama wants to arm the Free Syrian Army even knowing that several factions within said 'army'... factions including Ahl Al Athar, Ibin al-Qa’im, and Aisha...have 'pledged' to support ISIS...have pledged NOT to fight against ISIS so that they can continue to focus on taking down the government of Syrian President Bashir al-Assad. And there's something very unnerving in this 'pledge'...and it's something Obama knows damn well...and it's the fact that this ceasefire of sorts between the Free Syrian Army and ISIS was mediated by the al-Nusra Front, which is al-Qaeda's affiliate in Syria. 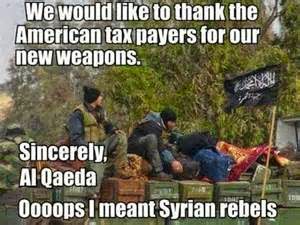 So do you really think Obama wants to take out ISIS knowing that al-Qaeda has NOT really broken their ties to ISIS by their working through the Free Syrian Army...I for one think NOT. And how can Obama believe that the Free Syrian Army itself won't actually merge with ISIS if that's the best way for them to topple al-Assad...won't merge with ISIS while carrying and using U.S. made weapons and arms. And how can Obama NOT see that the true goal of the Free Syrian Army is NOT just regime change as they so claim, but is to join the caliphate as they fight against the secular government of al-Assad with one hand and carry the black flag of islam with the other. And when will Obama realize that there are NO moderates in Syria when the very group he keeps calling 'moderates' are the ones who last March slaughtered 88 Christians in Kassab (beheading thirteen of them), and are the very ones who massacred 220 unarmed civilians in Ballouta, in August of 2013.

And when will Obama realize that his belief that ISIS can only be destroyed with a long-term strategy founded upon building a coalition of local and regional allies will NOT work...and when will he realize that 'limited' air strikes alone do NOT a sustainable counter-terrorism strategy make...that only 'boots on the ground'...as in upward of 120,000+ will...and that those 'boots' need to include many Arab 'boots' as well. And when will Obama realize that ISIS is indeed vulnerable...very vulnerable in fact to undermining strategies when the beheading videos they put out are NOT just done to strike fear into we infidels, but are primarily done in hopes of recruiting Americans and Europeans into their ranks...and this leaves the door wide open for infiltration by U.S. and allied intelligence...that is if one's goal is to truly take the enemy called ISIS out. 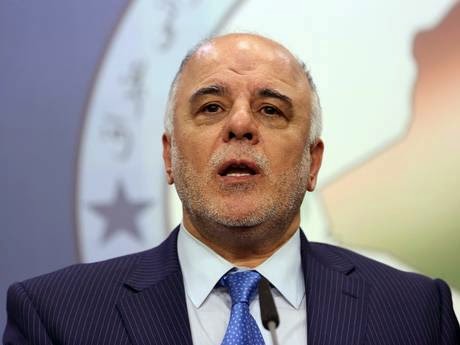 To take the enemy out...I'm NOT even sure that Iraq itself wants to take ISIS out for Iraq's new Prime Minister al-Abadi has recently said that he will NOT allow Iraqi warplanes to bomb civilian areas...even areas ISIS controls...areas like in the major cities of Mosul, Takrit, and Fallujah...in an effort, he says, to ease the growing tensions between his Shi'ite government and the Sunni minority. And so just like Obama's putting politics before doing what's needed to end the scourge of ISIS once and for all, al-Abadi hopes...NO prays...that ending the bombings of civilian areas will slow or halt the support the Sunnis have shown towards ISIS as payback for what they believe to be abuses done by Shi'ite led security forces...by the Shi'ite dominated government forces.

But you just know we're in trouble when first, the U(seless) N(ations) agrees with a leader who is supposed to be on our side...a leader of a country that saw thousands of American lives lost and billions of dollars in treasure spent...second, when this new policy of al-Abadi could affect how much, how often, and where the U.S. itself could bomb...and lastly, you know we're in trouble when the sad reality is that even if we manage to defeat the islamic terrorist group known as ISIS, the discontented and delusional who survive will simply morph into yet another group out to kill us all.

And we know this because the problem is NOT with ISIS alone but is with the entirety of islam...and it's time the world knows this truth as well...they just need to take their blinders off and see the carnage that has been done in the name of islam...in the name of allah.

So let's be honest here...these beheading videos do serve another calculatingly clever purpose for ISIS is sitting back smiling knowing that American 'boots on the ground' would actually raise money for them to use against what more than just Iran consider to be the 'Evil Satan.' And ISIS also knows that if American 'boots' do go in Obama will pull those 'boots' out NO matter how high their numbers grow...and will do so well before the ultimate goal of destroying them is reached and done. And sadist of all is the fact that the most powerful nation in the world has been allowed by Obama to be brought to its knees by a group of islamist terrorists wielding knives as their banner wherever they go.

And ISIS knows all this because Obama continues to ignore all the obvious things that need to be done...and they know this because Barack HUSSEIN Obama is indeed a muslim and as such is now and forever part of the collective consciousness of those out to kill us all.
Posted by Diane Sori at 12:03 AM