Op-ed:
Political bullies...existing at all levels of government 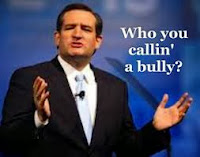 Bullying…the use of force, threat, or coercion to abuse, intimidate, or aggressively impose domination over others. Bullying…what better word is there to describe the growing number of RINOs in the House.

And while lately the issue and consequences of bullying in general has been all over the news…as in bullies in our schools, bullies on the playground, bullies in sports…sadly, the bullies within the ranks of the Republican party…certain long-term way past time to leave RINO bullies… seem to be dominating the headlines. These political bullies…as in the likes of John McCain and Lindsey Graham to name but two…held Republican lawmakers in both chambers hostage with their made-up doomsday scenarios about defaulting as they sold their party…and ‘We the People’…out to the Obama political machine.

These bullies…in getting House Republicans to surrender to ‘Prince’ Harry Reid…a bully in his own right…and his anything but compromise Senate bill to end the government shutdown and raise the debt ceiling…made those in the House, when it came their time to vote, appear as the humiliated, impotent, beaten down lawmakers they proved themselves to be.

And their bullying doom and gloom tactics overwhelmed and overtook any semblance of a backbone that Speaker of the House John Boehner once had.

As if the House surrender wasn’t bad enough, in their efforts to sell us all out, these Senate bullies tried to defame the few Republicans in both chambers who stood strong against Reid and crew…zeroing their bully pulpit tactics in on the one man who had the guts and courage to get in their faces from day one with his unwavering stance against the nightmare that is ObamaCare.

Senator Ted Cruz, called a bully by the RINOs, led the charge against the true party bullies and in retaliation has been slandered NOT only by Senate and House Democrats but by those within his own party…by those who wanted to acquiesce to ‘Prince’ Harry Reid from day one…by those who cared only that they and their cushy perks might be hurt by the shutdown while NOT caring one iota about those who were disrespected by this administration…as in our elderly WWII veterans.

And so any in either chamber who voted for this abomination of an anything but compromise bill…voting in lockstep for it even after Obama…and YES it was Barack HUSSEIN Obama….blocked the memorials to those who served…these sellouts MUST be voted out of office…and their bully tactics along with them.

True Conservative Republicans in Congress must unite and stand strong on two front…against the always liberal Democrats and also against the growing ranks of the RINO bullies who seem to be overtaking the House. And in the toxic environment that is the hallmark of today’s political scene, these political bullies must NOT be allowed to rule the roost, because if they do the Republican party…the party of our beloved Ronald Reagan…will be forever doomed…doomed because of ‘old guard’ bullies who will try to hang onto their political life by any means possible, including by NOT doing the people’s bidding if it does NOT serve their personal agendas.

But sadly, political bullying is NOT just the signature of those in DC…it trickles down through the states, the counties, all the way down to the local level. And at the local levels it can be even nastier than at the federal level…I know as I’ve just recently experienced a tried but failed bullying attempt against me. Standing strong against the individual and their pitiful attempt to bully me…intimidate me…I used something so often forgotten…so often overlooked…but something very effective in neutering a bully…in a word ‘facts’…and facts are the very thing the RINOs love to ignore.

And while this Lady Patriot does NOT take kindly to being bullied so should those who were elected to do the people’s bidding for those who succumb to bullying…like the RINOS in the House…are pitiful…with those who do the bullying even more so. And bullies like McCain and Graham will get theirs when they’re up for re-election…that is if they even have the guts to run after their sellout to the Democrats and Obama. 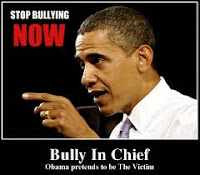 Bottom lie…all politics starts at the local level so at the local level is where the bullying must be squelched first so that those in power in DC…those who think they’re untouchable…get the message loud and clear that ‘We the People’ will NOT tolerate their political bullying and bickering at any level…especially by those from our own party who are trying to implode us from within.

We already have head bully Barack Hussein Obama trying to implode our country from within…we don’t need our own party bullies helping him.

And so the Republican Party must return to its true Conservative roots if we are to keep the House and take back the Senate in 2014…and that means the bullying tactics of the ‘old guard’ must NOT be allowed to dominate the conversation any longer. It’s time for the next generation of leaders to take over…new leaders that include members of those aligned with the TEA Party…for the TEA Party will be the salvation of the Republican party…that is after all the RINO bullies have been sent packing.
Posted by Diane Sori at 12:04 AM